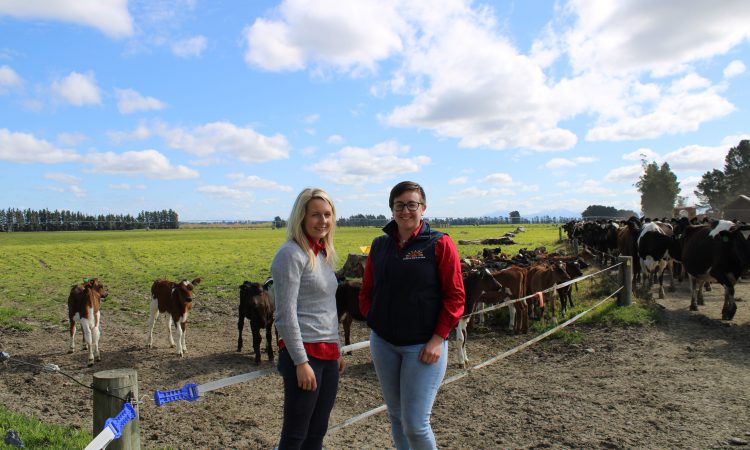 Suzanne and Maurice Hanning run Bristol Grove Dairy, near Invercargill in Southland, New Zealand, which has been converted from a sheep herd.

They are now milking 650 cows on a diet of grass and 0.5kg concentrates/day. Because they were starting with a clean slate, more choices were available to them than if they were taking on an existing dairy unit.

Christine Cummins and Amanda Dunn from Bonanza Calf Nutrition recently went on a study tour to New Zealand where they visited farms with challenges similar to various Irish farms. They reported the elements of Bristol Grove Dairy that makes their calf rearing the success that it is.

From the get-go the Hannings were conscious of the importance of resilience in their cows. No matter what system is being farmed – indoors, grazed, year-round or seasonal calving – challenges will occur. It is important the cows retained on a farm are the ones that can handle the challenges of the particular system of that farm.

Knowing this, Suzanne and Maurice decided to let their cows do the talking by starting the dairy herd with multiple breeds – 33% Friesian, 33% Jersey and 33% Friesian x Jersey.

They had a strict breeding policy and they wound up with the breed that were most resistant to culling. This was the JEX cows with the preferred ratio 60:40 Je:Fr as they are good for heavy soils which take up a significant portion of the farm.

Due to their strict culling policies they are in the top 5–10% of performing farms in New Zealand.

Calves are the future of the herd

Many farms select cows according to certain targets often measured by weight or size prior to breeding. As calves are the future of the herd and what happens to them in the first weeks of life can affect their potential in the milking herd, might that be the best time to start the selection of the replacement heifers?

This is exactly what the Hannings do. They begin their selection process when the calves were just a few weeks old.

If the calves are not keeping up with their peers by 12 weeks-of-age, they are scratched off the ‘keeper calves’ list and transferred to the ‘for sale’ list.

They rear approximately 290 replacement heifers and 160–170 are brought into their own herd. It is important to Suzanne and Maurice to keep the tougher calves; resilience is a necessary trait.

If prospective replacement heifers are not growing as they should in the first weeks of life, they give them one chance and if they haven’t caught up by December (approx. three months-of-age), they sell them at approximately 100kg liveweight.

Three of the most important things for calves on this farm are:

A key performance indicator for every day monitoring is ‘fluffy clean tails from top to bottom’ along with lots of playing.

One vital aspect of ensuring the calves maximise their potential is through basic nutrition. Suzanne and Maurice have always believed in the power of nutrition for health and growth.

They have a strict policy with this from birth. Calves are picked up once daily in good weather and multiple times in bad weather.

At night time they bring stored colostrum with them to give to calves in the paddock via stomach tube. Every time a calf is picked up from the paddock, they get tubed with 2.0L of colostrum immediately upon arrival to the calf shed.

Colostrum is collected from cows at the end of the milking. It is held in a separate container to all other stored transition milk (14,000L VAT). They felt this policy was quite good; they were on top of their game, ensuring they fed calves ASAP and taking extra care in bad weather.

Suzanne stated that: “Colostrum is 95% of the secret to rearing calves,” so they were ensuring they did their best to get it into calves quickly.

Calves are put into group pens from day one and remain in their groups unless they are unable to keep up. They feed gold colostrum for as long as possible which is usually three days.

From day four calves are fed 4.5-5L of transition milk per day. They feed them twice daily until they become tough and hard to handle at which time they are transferred to once-a-day (OAD) milk feeding.

From the beginning they have access to concentrates, hay and water ad-lib. They start with muesli then move to an economy meal (lower protein) and it is removed when calves reach 100kg at which point, they will have been outdoors for a number of weeks, getting accustomed to grazed grass.

The importance of colostrum

Their beliefs on the importance of colostrum were confirmed when they hit a bump in the road with calf health.

Things were working quite nicely at Bristol Grove Dairy until a serious rotavirus outbreak occurred, during which they were mixing up 1,000L of electrolytes daily to help the calves to get through it.

The following year, they continued their usual practices of collecting calves and feeding colostrum ASAP and focusing on hygiene, but they additionally vaccinated their cows against rotavirus. Unfortunately, they still got rotavirus which was highly frustrating for the Hannings.

They began to analyse where things could be going wrong and part of this was testing the calves’ immune status using a blood test. It was then they realised that many calves actually had an inadequate immune status meaning that they weren’t acquiring sufficient levels of antibodies into their system via colostrum.

Subsequently, colostrum management was investigated and it was tested using a refractometer, which revealed that the quality of the colostrum was inefficient – it had a low concentration of antibodies.

The milk lines they were using to collect the colostrum had residuals of whole milk which was diluting their fresh colostrum, lowering the concentration of essential antibodies. They now have to measure to prevent this happening and continue to test all colostrum using only samples passing the trial of the refractometer.

Bristol Grove Dairy is a perfect example of how keeping it simple works. It doesn’t need to be high tech or complicated; just do the basics excellently.