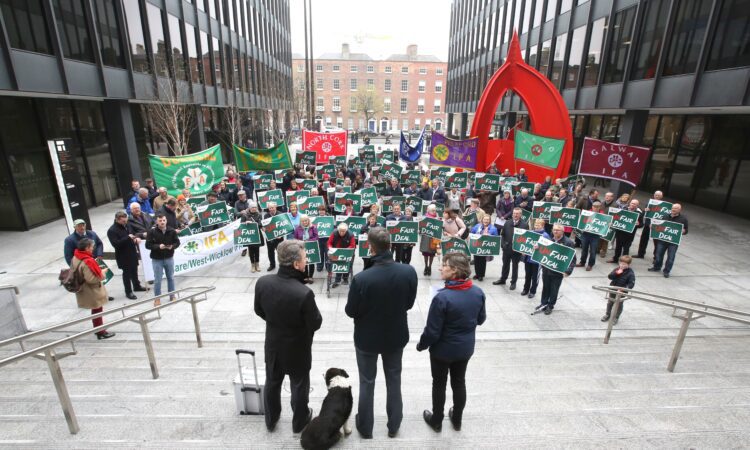 The minister also confirmed that “the focus on Brexit has had an impact on progressing the heads of bill in respect of the scheme”.

He then confirmed that, subject to legal advice, the anticipated changes to Fair Deal will come into effect in 2019.

Speaking after the Irish Farmers’ Association (IFA) protest over the Government’s handling of the Fair Deal scheme, Daly said it focused on ensuring that long-term nursing home care is “accessible and affordable for everyone”.

During this morning’s protest Joe Healy, the association’s president, claimed that the Government had “abandoned” farm families by failing to implement a three-year cap on farm assets as part of the scheme’s financial assessment.

He also pointed to the fact that nine months have passed since the Government approved the proposal to introduce the cap.

Meanwhile, the minister said that currently there is no cap on the contributions to the cost of care based on farm and business assets, except in the case where a person in possession of such assets has suffered a sudden illness or disability necessitating long-term residential care.

The policy change to cap contributions based on farm and business assets at three years where a family successor commits to working the productive asset has been approved by Government.

He concluded: “The department of health is working on the development of draft heads of bill with legal advisers on advice and legal quality control.

“Farmers can also avoid the farm being included in scheme consideration where the farm is transferred to the next generation five years prior to application for the scheme.”