There has been a reduction in the number of farm deaths recorded in 2018, compared to the average of the previous five years, based on provisional figures from Teagasc.

A total of 17 deaths were recorded in 2018 – some five fewer than the average figure of 22 fatalities recorded during the period 2013-2017, the agricultural authority has announced.

No farm fatality was recorded in the final quarter of 2018.

Teagasc health and safety specialist Dr. John McNamara called on farmers to give safety first priority during January and the busy spring period in 2019.

He said that the risk of farm accidents rises with increased work activity and prevention is strongly associated with implementing behavioural practices.

Being struck with a moving vehicle is the most frequent cause of farm deaths on Irish farms, so particular vigilance is needed when they are operating, he stated.

A vehicle moving at fast walking pace covers about 2m/second so it gives a person in its path little chance to avoid impact. Elderly farmers are at particular risk, he added.

Vigilance is also needed when handling livestock, particularly cows around calving. He advised that a freshly calved cow be securely restrained before administering a treatment to their calf.

When the slurry spreading season gets under way from January 13 in some areas, vigilance is required with this operation.

Power shaft guards need to be in place; a windy day needs to be selected for slurry agitation and all slurry tank openings need to be guarded to prevent drowning.

The Teagasc health and safety specialist also advised farmers to be watching out for unstable loads around the farm.

As barns empty out, it is really important to watch out for unstable stacks of hay or straw which could collapse and cause injury.

Completion of the revised document is a requirement for Food Assurance schemes, Teagasc has reminded farmers.

Completion of a half-day training course on risk assessment, or completion of the Green Certificate within the last five years, is a mandatory requirement for TAMS 11 grant draw-down.

Further information can be obtained from Teagasc offices or agricultural consultants. 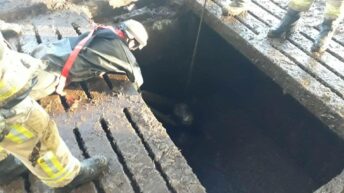