Each spring, they rear 500 calves with a mortality of only 2%. Their secret is to do the basics with consistency and with attention to detail.

What are some of the basic challenges in calf rearing?

The first one is at the very beginning, when purchasing calves – their potential exposure to infectious diseases.

Being highly conscious of the importance of biosecurity, Karen has built a relationship with local farmers to purchase calves directly from them. They are collected by Bruce at four days-of-age and stay with them until they are a minimum of 100kg (usually within 10 weeks).

All Friesian calves must leave the farm before Christmas each year to fill the contract and so the Telfords rear only 200 Friesian calves from one specific farm. Thereafter, they purchase calves from three other farms and bred by beef sires such as Hereford and Angus. 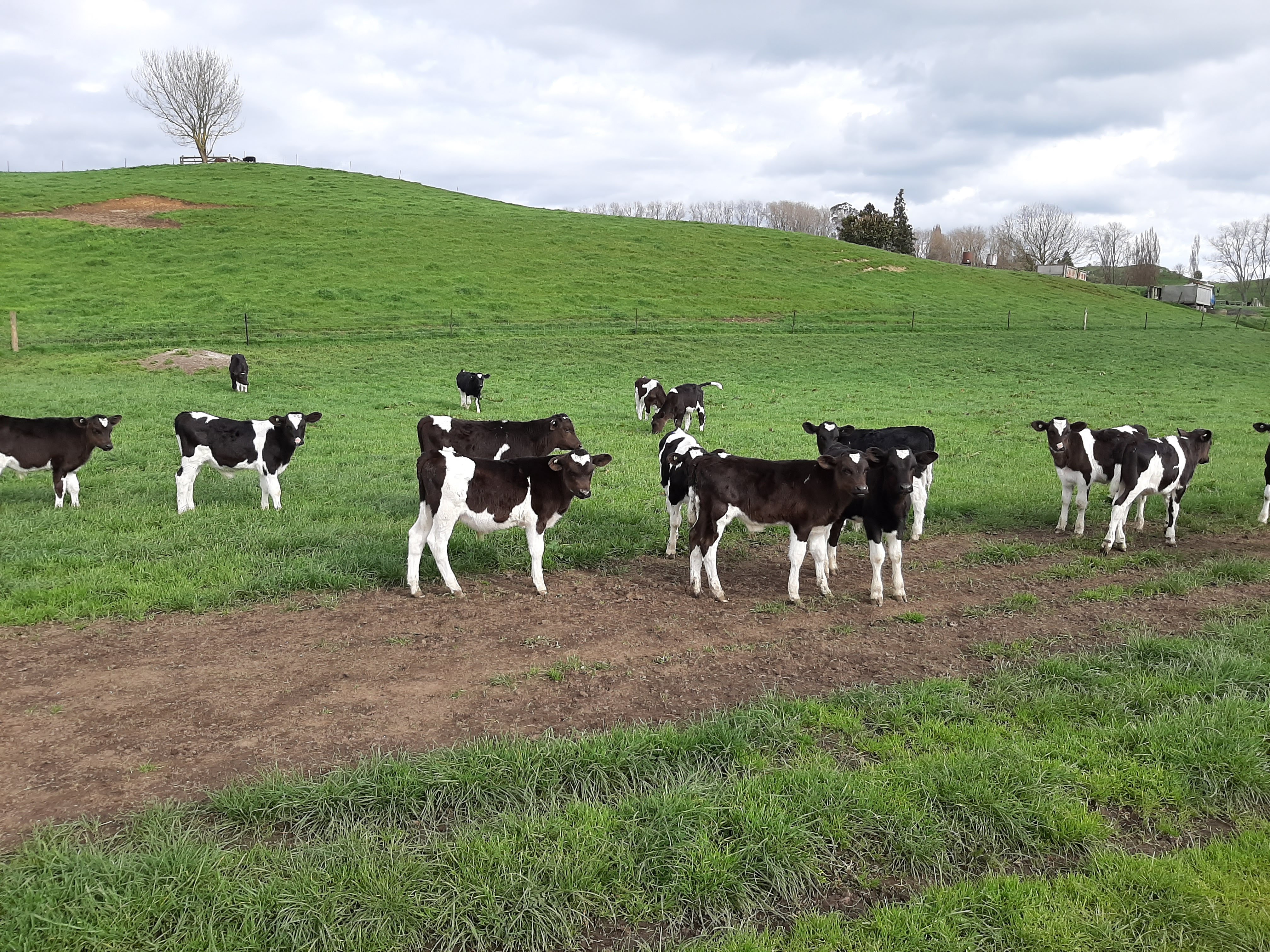 There are specific contracts that calf rearers must fulfill which are agreed prior to the calving season; the agreement typically includes a flat rate to be paid for calves once they reach a standard target of 100kg within a certain time period.

The pre-agreed contracts come with a number of advantages to the calf rearer; they know where they stand in terms of what calves to purchase (e.g. various breeds), they have a target which they have to meet giving them motivation during the rearing period, and they are assured a price if they meet this target which allows them to make up a more accurate budget.

Many calf rearers purchase calves through public sales and so they are taking a risk. Filling contracts for Friesian breeds in New Zealand is quite specific. Crossbreeds such as those with Jersey through them are not desirable and may be rejected when the calf rearer goes to move them on at 100kg.

Selection of the calf at the mart is typically by colour – four white feet and a white star on the forehead is the most desirable colour. The thought is that this is a Friesian trait so it is the safest bet. Traits of other breeds such as Jersey colouring often don’t appear immediately.

Another advantage of having a relationship with specific farms is the health aspect. The bull calves are well looked after; if the dairy farmer does not treat the calf the same as the heifers, issues would be evident when they move to the calf rearer at four days-of-age.

If this is to happen, they will lose the sale of these calves and have to take them through the marts. Calf rearers that do purchase through the marts have commented on various troubles they have come across with sick calves.

To try prevent this they keep track of the farms they come from and keep away from these calves going forward.

Although this is an incentive for dairy farmers to ensure good management of the bull calf when born, they are not only relying on one farmer to purchase their calves at the sale and the next dairy farmer the calf rearer purchases from may have the same situation, providing weaker calves.

Welfare of calves is top priority

The welfare of the calves is top priority for Bruce and Karen. Keeping communication open with the dairy farmers is the first point in ensuring the calves are as healthy as they can be upon arrival.

Thereafter, they have specific management practices to help maximise the health and growth of their calves. 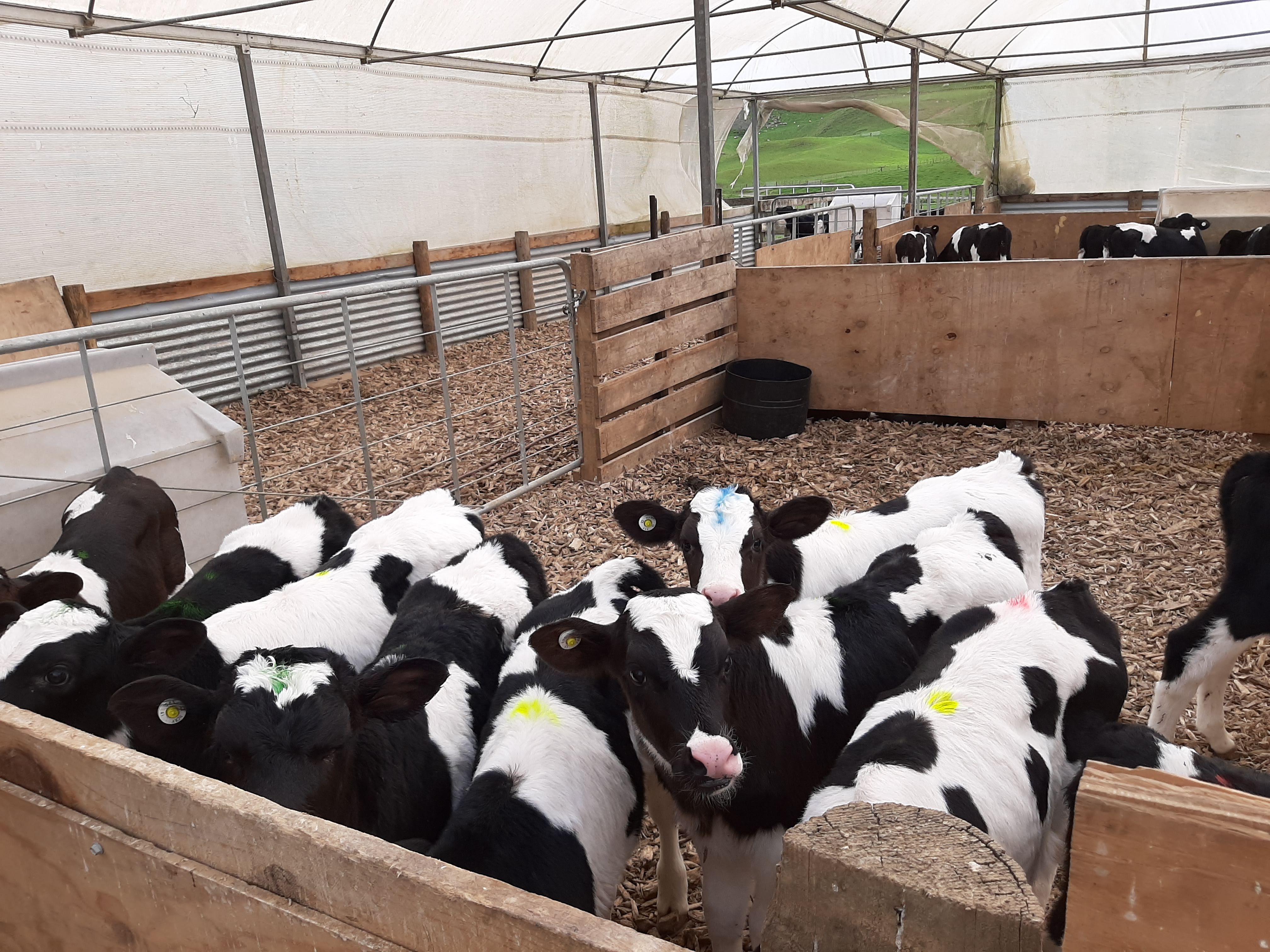 As the calves are only four days-of-age on arrival, the digestive tract is still vulnerable and developing.

Knowing this, Bruce and Karen take transition milk (milk produced immediately after colostrum) from the same farms the calves come from and feed it to them to maximise their health and growth, giving them the start in life that they need.

Keeping the movement of whole milk specifically from the farms the calves come from improves biosecurity compared to traditional practice on many calf-rearing farms who take milk from multiple farms of unknown disease status.

Furthermore, the Telfords do not take any antibiotic milk or any waste milk of any description. Biosecurity awareness is increasing in New Zealand, particularly as awareness increases about the potential transmission of Johne’s disease and mycoplasma through milk.

It is an issue that can be easily overlooked as it is not always an obvious issue with immediate consequences. This is often particularly true in the face of feeding waste milk from cows.

In addition to antibiotic milk, high somatic cell count (SCC) milk can also be a risk for the calves and this can be a sign of infectious disease transmissible to the calf via milk.

This is due to the way in which the protein is digested; it is closer to the digestion of whole milk in that they both form a curd in the stomach allowing the calf time to absorb sufficient amounts of protein.

Karen feeds the calves 4L of milk twice a day (TAD) indoors for the first three weeks, after which they are turned out to paddocks with shelters and fed 500g in one daily feed.

Calves are fed on multi-teat feeders indoors and 50-teat trail feeders when outdoors at grass. They have a maximum of 43 calves per 50-teat feeder to ensure they all have sufficient space to compete for teats. 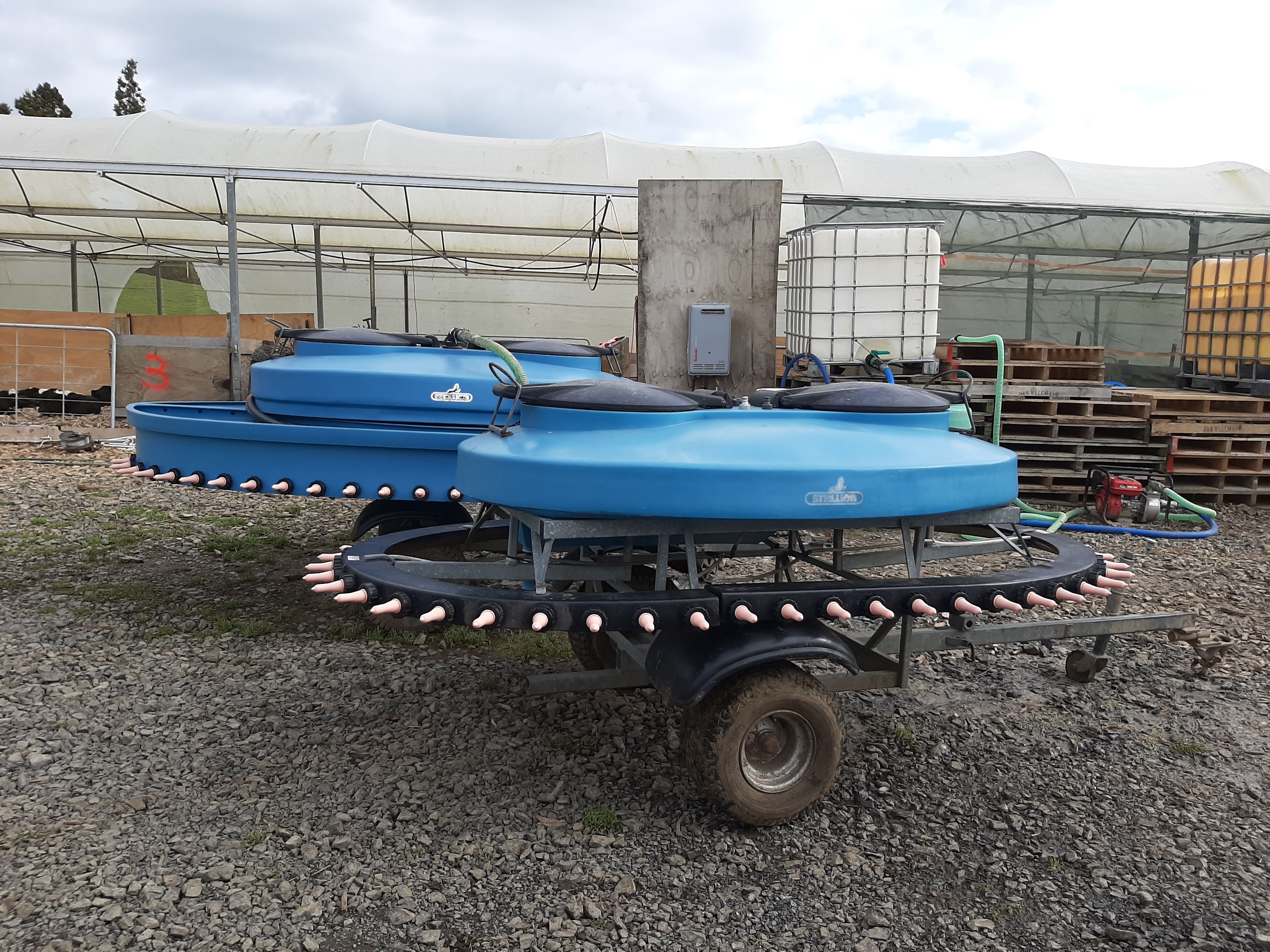 As the calves are competing for milk when drinking they are grouped according to drinking speed in an effort to create a level of equality between them.

They have ad-lib access to water and concentrates from day one. Having concentrates available to the calf from the first week of life gives the chance for the young calf to become familiar with new feeds and so when they get a little older and require more energy than that provided by their milk feed, they will be consuming sufficient amounts to have kick-started their rumen.

It typically takes a calf two weeks to become familiar with and develop microbes in the rumen to eat a sufficient amount of concentrates to gain any energy from it.

As calves are sold according to a target of 100kg, weight is a very important element on the Telfords farm. Calves begin a two-week weaning process when they hit a target of 85kg, which is typically by the time they are six weeks-of-age.

From the day of arrival (four days-of-age), calves gain approximately 0.8kg/day to weaning and from post weaning they are gaining more than 1kg/day.

This indicates that their rumen is sufficiently developed to sustain growth and health when milk is removed from the diet.

Once a day (OAD) milk feeding is a very advantageous way to encourage rumen development. Calves will only be waiting on one feed in the day and can spend the rest exploring other feeds, consuming larger amounts of rumen digestible feeds at an earlier age.

Furthermore, OAD milk feeding keeps the system simple and saves on a lot of labour. Both Bruce and Karen have other jobs in the industry and therefore successful feeding of calves OAD greatly reduces their workload.

At the time the Bonanza girls visited the farm, the Telfords had 300 calves and it was taking just two hours to look after that many calves which equates to two and a half minutes per calf.

Prevention rather than cure

For Karen and Bruce, prevention rather than cure is the approach. In the past they had some issues with rotavirus and so, for the first four days after arrival, a non-antibiotic aid to the prevention and treatment of the common causes of calf scours is added to their morning milk feed.

This product contains a mixture with spray dried egg powder containing specific immunoglobulins. They also are extremely diligent about their hygiene.

All pens are kept clean and all feeding equipment is rigorously cleaned every day. As calves are developing their immune system during the milk feeding period, the exposure to harmful bugs should be kept to a minimum. 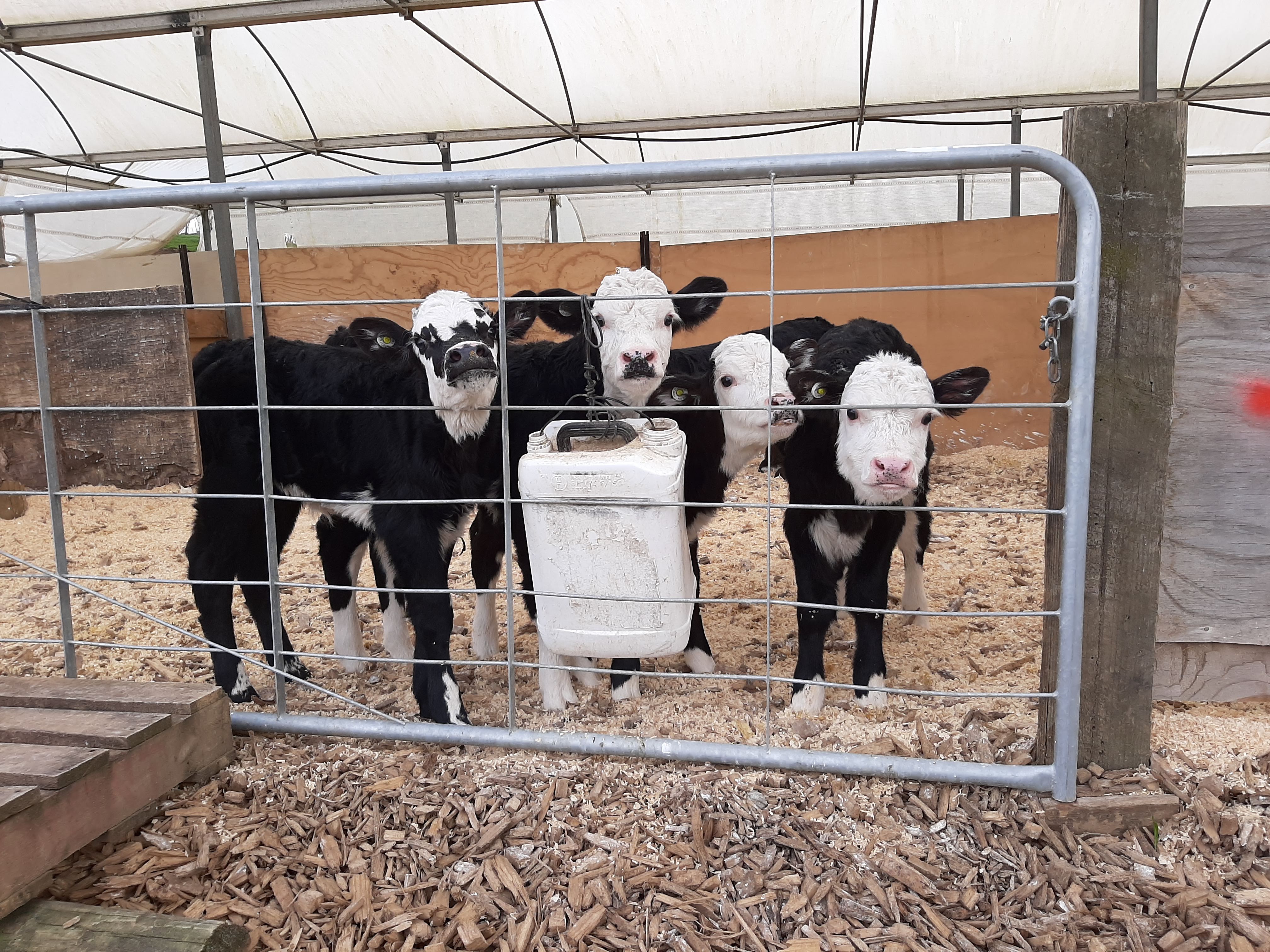 Feeding equipment can quickly become a successful breeding ground for these bugs which include cryptosporidium and rotavirus along with several more. It is important that the calf rearer keeps as much of the environment as possible consistent for the calf and this includes the level of exposure to harmful bugs.

Some bugs are difficult to combat with hygiene alone; this is particularly true when young calves are outdoors at grass. Coccidiosis is a parasitic disease that although it can be contracted indoors, it is much harder to control at grass.

Because of this it is common practice in New Zealand to include ingredients in calf milk replacers to help prevent an outbreak.

Furthermore, clostridia bugs that are harboured in the soil are difficult to escape when young calves are at grass. Hence, it is common practice across New Zealand to vaccinate calves for clostridia infections.

The Telfords administer a 5 in 1 clostridia vaccine when calves are three weeks-of-age and a booster approximately four weeks later.

Any calves that appear to be weaker than others, including those slow to get going after they arrive, they are taken out and placed in a separate pen until they get a bit stronger. This removes stress for the calves giving them a greater chance and reducing the risk of becoming very sick.

Keeping environment as stable as possible

Another aspect that has a significant impact on the successful rearing of calves is their environment. Although the weather is ever changing, we can still help to keep their environment as stable as possible.

This includes having shelter from draughts and keeping it clean. In New Zealand all straw must be imported which is not economically viable and so alternative bedding must be sourced.

A common source is woodchip, which is the first choice for Bruce and Karen. Underneath their calves is an earthen floor, a heavy application of lime and a deep bed of woodchip. This is extremely dry as there is excellent drainage through this.

They spray the pens weekly with a knapsack using a disinfectant based on chlorine dioxide.

Furthermore, all pens are divided by solid barriers which not only removes physical contact between groups, but also eliminates drafts flowing through the house at calf level.

Letting young calves out to paddocks in the middle of spring can be a shock to their system and so the Telfords have helped with this by providing shelters for the calves.

This makes the transition much easier, particularly due to the greater impact changing weather will have on them compared to being housed indoors.

Gardaí pull over tractor for unsecured load of bales