Raising the bar on milk quality in Co. Waterford 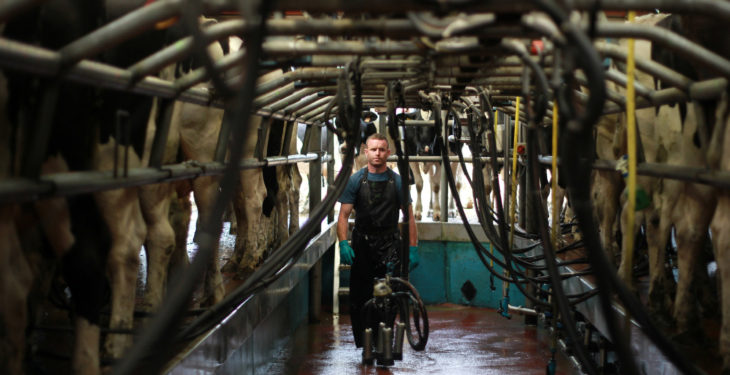 Attention to detail is one of the reasons why Tom Power, Drumhills Farm, Cappagh, Co.Waterford, was the National Winner of the NDC (National Dairy Council) & Kerrygold Quality Milk Awards in 2016.

The farm is located west of Dungarvan in Ballinameela and has stunning views of the surrounding area, including the Comeragh and Knockmealdowns Mountains.

Tom and his wife Moya are fifth-generation farmers, milking 240 Friesian cows. Tom is passionate about producing the best-quality milk in a sustainable and profitable way.

He believes attention to detail and meticulous planning are important tools in raising the bar on milk quality.

The herd’s bulk SCC (somatic cell count) ranged from 30,000 to 80,000 this year. Using SureSeal® internal teat seal from Norbrook is part of that jigsaw in producing quality milk.

Tom started using a teat seal three years ago. Initially it was just on heifers, as some were calving down with mastitis or blind quarters. After seeing the benefits in the heifers, Tom started using SureSeal® on all cows during dry period.

He used very strict criteria to select the cows that were to get a teat seal only. Cows getting only teat seal had to have a SCC below 100,000 for all milk recordings, as well as no cases of clinical mastitis in the current year or in the previous lactation.

Advertisement
Applying these strict criteria, 50% of the cows received SureSeal® alone at drying off. This year, the plan is to use SureSeal® only on the cows that fit these criteria and dry cow plus SureSeal® on the rest. He has seen the benefit of sealer over the last few years and likes the SureSeal® product.

Tom thinks the nozzle on the SureSeal® product works very well to help place the sealer in the teat canal where it is needed, while minimising damage to the teat canal.

He also says drying off cows should not be a rushed job and should be given the planning and time it deserves.

Tom usually dries off one row (20 cows) at one time under very strict hygiene conditions. The cows selected for drying off have their tails and udders clipped the day before and this helps keep conditions as clean as possible.

How does SureSeal® work?

SureSeal® works by forming an immediate physical barrier in the distal part of the teat. This minimises the bacterial challenge from the cows’ environment and preventing ascending intramammary infections.

Watch the video below for best practice administration of antibiotic dry cow products and teat sealants.

Open teat canals, where an incomplete keratin plug is formed or where there is a delay in forming that plug, are a major risk factor for the invasion of pathogens.

The bacteria picked up as a result of open teat canals can manifest as clinical mastitis in the days around calving or in the first few weeks after calving. Click here for more information on SureSeal®