Met Éireann has issued a Status Yellow rainfall warning for the full country ahead of Storm Dennis with some flooding expected.

Issued this morning, Friday, February 14, at 11:00am, the alert will come into effect from 6:00am tomorrow morning. It will remain in place until 9:00pm tomorrow evening.

Affecting all 26 counties in the republic, the national meteorological office warns that spells of heavy, locally thundery rain on Saturday will lead to some flooding.

Meanwhile, Met Éireann also issued a weather advisory for Ireland ahead of Storm Dennis which is expected to bring flooding and gusty winds that could possibly cause disruption.

Weather advisories are issued to provide early information on potential hazardous weather. They may also be employed when a sum of weather elements act together to create “a significant hazard”.

Conditions will become cool and mostly dry early tonight. Some patches of frost are expected in places for a time mainly in northern and eastern areas.

However, frost will clear later tonight as rain and strengthening southerly winds will extend eastwards as the night progresses.

According to the national forecaster, the influence of Storm Dennis will be felt over Ireland on Saturday, even though the storm centre will be just to the south of Iceland. 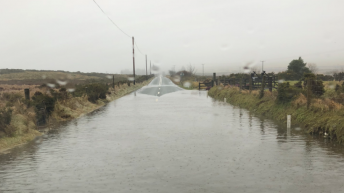