Met Eireann has issued a Status Yellow rainfall warning for seven counties in the south and east of the country.

The rainfall warning has been announced for the counties of: Carlow; Kilkenny; Wexford; Wicklow; Cork; Tipperary; and Waterford.

Rain will be persistent and heavy at times, especially during the afternoon. Totals of 25-40mm are expected, with highest values likely near the coast. There’s also the risk of spot flooding due to the high totals in a short space of time.

When it comes to maximum temperatures, Met Eireann says temperatures of 12-14º are expected.

Scattered showers may develop towards the morning, it says, with fresh north-westerly winds backing westerly overnight; these will be strong and gusty at times.

Another chilly night is also forecast, with minimum temperatures of 5-7°.

Turning to Friday, Met Eireann says it will be cool, bright and breezy, with sunny spells and scattered showers; the showers will be most frequent in the morning.

Strong and gusty west to north-west winds are also forecast; these will ease towards the evening and the showers will become increasingly isolated. When it comes to temperatures, highs of 13-14° are anticipated. 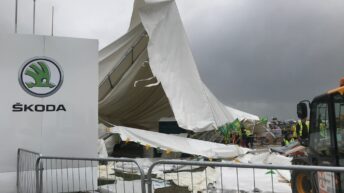