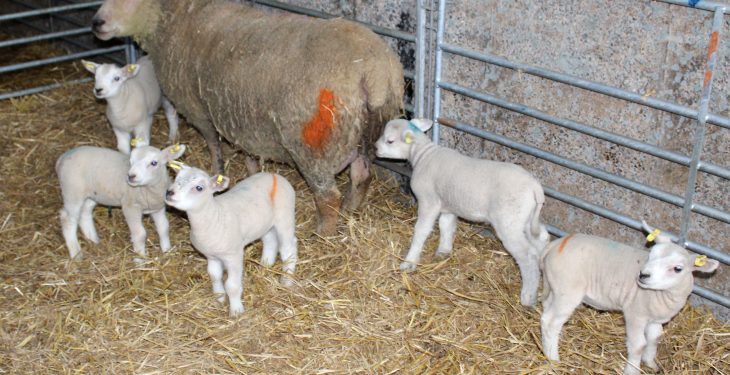 This week saw a pedigree Charollais ewe give birth to quintuplets on the north Tyrone farm of the Foster family. The even better news is that the mother and all the new arrivals are doing well.

“We were expecting the ewe to produce four lambs, based on her scanning results,” said John Foster.

“The arrival of the fifth was a genuine surprise. All of the lambs are of a decent size and the fact that they are all progressing well represents a genuine boost at the start of the 2017 lambing season.”

The Fosters, owners of the Springhill Texel and Charollais flocks, are totally committed to achieving the highest levels of performance from all of their sheep. John’s son Graham takes up the story.

We run 200-crossbred ewes in tandem with 40 pedigree Charollais females and a 70-strong purebred Texel flock.

“Only 15 of the Charollais females are crossed pure: the other 25 are put to high merit Texel tips. This allows us to produce extremely high quality cross bred rams, which are in great demand amongst an increasing numbers of commercial lowland flockowners.

“The rams have the ability to produce high quality lambs: they are also inherently fertile.

“The quintuplets, three ewe lambs and two rams, were produced from one of these crossbred matings.”

The Fosters’ Charollais ewes started lambing on January 5. The lambing season for the Texels and crossbreds will get underway at the beginning of February. A number of the crossbred ewes are carrying pedigree embryos.

Graham also confirmed that the family had enjoyed an excellent year in 2016, from a pedigree performance and sales’ perspective.

“We sold three Charollais ram lambs at Dungannon last September for 2,000gns, 1,400gns and 560gns with all three animals going to other pedigree breeders,” he said.