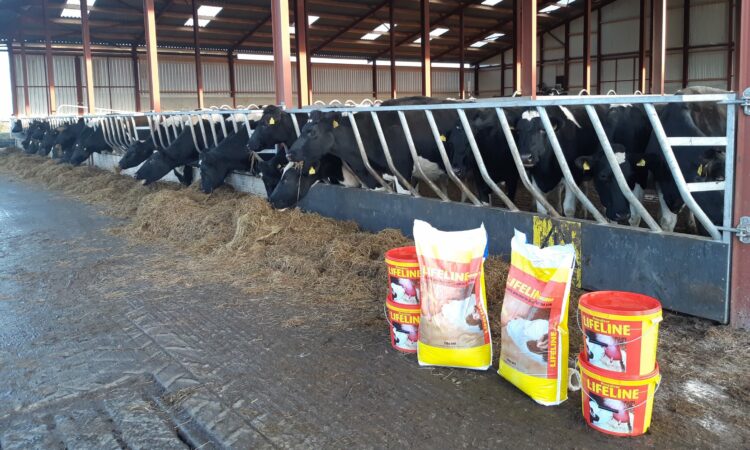 A mineral supplement given to pregnant cows in the final six weeks before calving is boosting colostrum quality at a Co. Kilkenny dairy and suckler beef farm.

Dean Denieffe, along with his parents Michael, Geraldine and his brother Michael, farm in partnership on the outskirts of Bennettsbridge. They calve down a herd of 170 spring-calving British Friesians and 20 suckler cows, of which they milk 140 cows throughout the year and sell on surplus dairy stock.

Good quality colostrum underpins calf health, with between 3L and 4L fed as soon as possible after birth.

“With the help of Lifeline Pre-Calver, I can improve the quality of colostrum to benefit the health of the calf,’’ Dean explained.

Uniblock, which manufactures the product, says it has been patented to boost colostrum quality by 25%.

The product has been formulated to contain immune-boosting ingredients to stimulate the cow’s immune system during the final weeks of pregnancy, to increase antibody levels in the colostrum.

“Uniblock has included levels of lactose, protected soya and a range of yeast products; these help to improve the vitality of the calf and stimulates the immune system,’’ said Dr. Amanda Dunn, of Uniblock.

Looking after the calf does not start when the calf hits the ground, but with the dry cow, she points out.

“Providing the dry cow with the correct vitamins and minerals is vitally important to the calf as these are then available in the colostrum,’’ Dr. Dunn added.

For the Denieffe’s, the typical dry cow diet consists of silage, straw and beet.

Timing when to feed the Pre-Calver is important, said Dr. Dunn. “Six weeks pre-calving is the optimum period to provide Lifeline Pre-Calver as colostrum formation begins approximately five weeks prior to calving.’’

Not only does it produce results, but intakes are good, Dean reports.

“The cows seem to really love the Lifeline Pre-Calver; it is very palatable and there are no issues with getting good intakes,’’ he said.

When approached by a rep from John Dalton and Sons, Dean first used Lifeline Pre-Calver three years ago.

Patsy Wilson, sales rep for John Dalton and Sons, said sales of Lifeline Pre-Calver have been strongly increasing over the years.

Lisa Cullen, who is the newest member of sales in John Dalton and Sons, has received very positive feedback from previous customers and stated “that anyone who has used Lifeline Pre-Calver in the past really like it and will not move from the product”.

The right balance of nutrients

The Denieffe’s have had no cases of milk fever within the herd since introducing Lifeline Pre-Calver.

Getting the balance of nutrition right in the weeks prior to calving reaps benefits to the cow in the days post calving, says Dr. Dunn.

Post-calving is the most common period for cows to become ill due to metabolic diseases, partly resulting from their vulnerability when they have reduced immunity at the time of calving.

“If the pregnant cow is lacking in the necessary minerals and vitamins, there will be an increased risk of post-calving health issues such as retained cleanings, milk fever, ketosis, poor dry matter intakes, poor quality colostrum, displaced abomasum and fertility problems later on,’’ said Dr. Dunn.