Pics and prices: Short-keep cattle in demand at Ballyjamesduff Mart

Some 600 cattle were on offer at Ballyjamesduff Mart on Tuesday last (August 14). Four rings were in operation which saw calves, weanlings, heifers, bullocks and cows all go under the hammer.

The trade was sharp for the quality; lots on offer and a 95% clearance rate was achieved. Although plainer cattle realised lower prices, there were still buyers in the market for these lots.

Beef and forward lots were popular among buyers; short-keep cattle also proved popular. The mart’s manager John Tevlin outlined that the trade has strengthened somewhat in recent weeks after a slow period.

“Things have picked up in recent weeks; we were not too badly affected as we have heavier ground and it didn’t burn up as much thankfully.

“Northern farmers were also not as badly affected and these customers were anxious for stock. However, the trade did dip with the way beef prices went. However, I’d expect to have the five rings in operation next Tuesday,” he explained.

Good-quality heifers were in demand – especially the heavier lots. These animals met a good trade and a top call of €1,400 was achieved by a 550kg animal.

Plainer types were easier, but customers still purchased these lots – albeit at lower prices.

Lighter bullocks also achieved good prices and a Limousin bullock – weighing 330kg – sold for €2.84/kg. Again, plainer steers were an easier trade, but they still sold in the majority of cases.

A 100% clearance rate was recorded in the cull cow ring. These lots achieved prices in the €2.00/kg region and a shake higher in some cases. A number of cows with calves at foot also went under the hammer on the day.

John said: “There’s a keen demand for the dry cows. Some of the factories seem to be short of cows this week and they returned to the ring to make up the short fall.

“The panic killing due to the drought seems to be over with the dairy men. Culls made up to €2.21/kg,” he added.

A number of bulls also passed through the ring. These lots met a sharp trade, with quality lots achieving the highest prices.

Continuing, John said: “There was a market there for anything nice. It’s early yet for weanlings around this part of the country; these lots are only starting to come.”

In addition, some 30 calves were also on offer; the sale was dominated mainly by stronger, Hereford types along with some Aberdeen Angus calves. 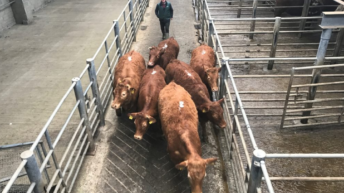