Ornua/Glanbia debacle: ‘We mutually agreed not to proceed under one umbrella’ 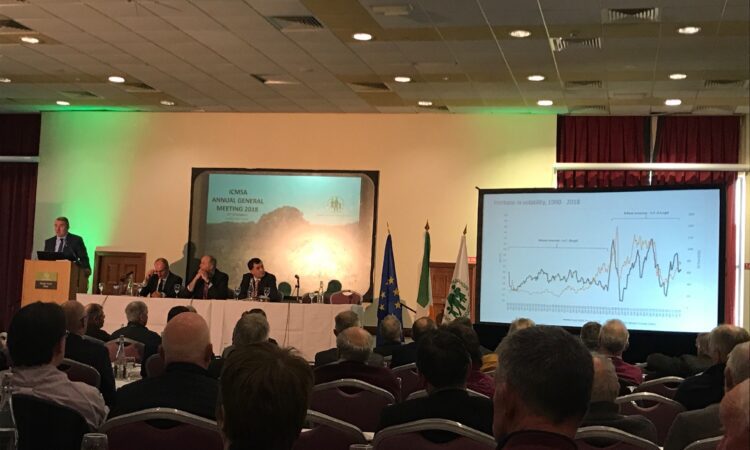 Ornua CEO John Jordan came in for a heavy line of questioning over the recent launch of Glanbia’s Truly Grass Fed range in the US at the Irish Creamery Milk Suppliers’ Association (ICMSA) annual general meeting in Limerick.

After giving a detailed presentation on the significant growth of the Kerrygold brand on a global scale over the last decade, Jordan found himself in the firing line when questions were opened to the floor at the South Court Hotel.

In response to a query on when Ornua was first made aware of Glanbia’s intention to launch its Truly Grass Fed dairy brand in the US, Jordan stated that Glanbia initially approached the Ornua board more than a year ago.

We mutually agreed not to proceed under one umbrella. It didn’t work having Truly Grass Fed and Kerrygold under Ornua’s umbrella.

“In terms of  the Glanbia strategy and what they have done since, that’s for Glanbia to comment on.

“Our view at the time was that Truly Grass Fed and where they were trying to position it, from a consumer point, is an overlap and it would cause some confusion in the market.

“Glanbia have a different view and that is fine, but ultimately the consumer in the US will decide,” Jordan stated.

Earlier this month, Ornua postponed its scheduled board meeting due to “governance issues” at board level amid growing concerns over the challenges that could be posed by Glanbia’s new venture as a number of Glanbia representatives sit on the Ornua board of directors.

At the time, an Ornua spokesperson said: “It is the remit of the directors of Ornua to act in the best interests of the co-op, in turn protecting the interests of Irish farmers.

“The directors are currently considering certain governance matters at board level and this month’s board meeting has been postponed.”

Speaking to AgriLand at the ICMSA AGM, Jordan said he is “confident” that the board issues will be resolved.

“The challenges around the board are for the board to deal with, it’s not within my remit, I’m not privy to the workings on that but I am confident that it will be resolved as quickly as possible.

“It’s an internal board issue and they are working hard to resolve it,” he said.

The next scheduled Ornua board meeting is expected to take place on Wednesday, December 12.

It is important to note that the total US cheese market is worth $15.3 billion per annum.

“As its largest shareholder Glanbia is and will continue to be a strong supporter of Ornua and Kerrygold – but our farmers have invested heavily in their farms and we need to maximise returns from the market for their growing milk volumes.