On the pigs back 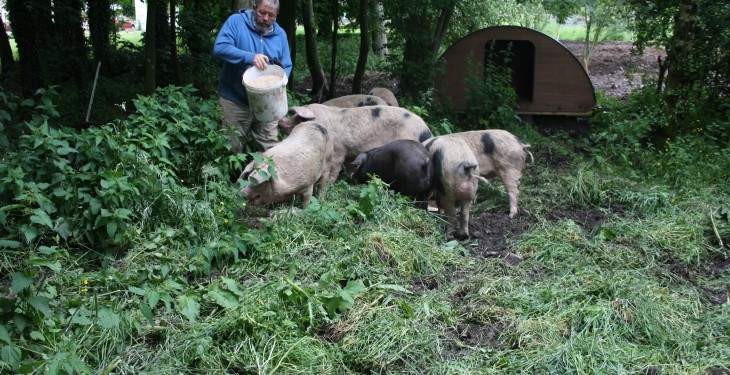 In 2003 Margaret and Alfie O’Farrell relocated from Dublin to Redwood in North Tipperary in search of a quiet country life however what they got was something entirely different.

For six years the couple, both in full-time employment at the time, grew their own vegetables and kept a few pigs for family and friends. However fate, in the guise of the omnipresent Recession, led to the couple losing their jobs within months of each other. According to Margaret: “We were getting really good reviews of our pork and decided to use this as a basis to start Oldfarm Pork.”

Oldfarm is now a hub of activity and the couple’s enthusiasm and can-do attitude is evident from the wide spectrum of initiatives on the farm. “We rear free-range; rarebreed pigs on a non-gmo, basically organic diet and we are passionate about the lives our pigs lead,” she explained.

In addition to the top-notch treatment of their animals the O’Farrell’s run a strongly customer-centric operation. Margaret details the process: “We sell directly to the customer, both private residential and some restaurants.  We talk to every customer before we send out their order and make up their box to whatever quantity and mix they like. People can order a small or large box, or can be more specific about the cuts. You can opt to collect your goods or Oldfarm will organise a courier service to deliver the meat to every corner of the market.”

While it may seem a stretch to get your tasty sausages couriered to your home judging by the glowing reviews and accolades, the Oldfarm products are well worth it. Georgina Campbell Guides described the saddleback pork as “in a league of its own, especially the crunchy crackling that you just don’t get with too-lean commercial breeds”.

Just this month Oldfarm Pork was awarded the Bord Bia Q Mark, the first free-range pork producer in Ireland to receive this accolade.

Oldfarm has diversified into a number of different areas and Margaret is practical about the reasons behind the move. “The simple answer is we needed to make a living. In our former lives we were both qualified trainers so it seemed a natural progression to look at how we could maximise these qualifications. Alfie started teaching the pig-rearing courses as we were constantly being asked for advice and thought that there must be a market there.  We have run six courses so far this year and have another course coming up on 8 September.”

Margaret used to train people in her former ‘marketing-on-a-shoestring’ role – a skill she has brought to the marketing of Oldfarm Pork.  Again she trains small business owners on marketing without a budget, delivering seminars to larger groups and also training to small groups in the couple’s home.

You would imagine there between training and farming there would be little time for anything else however this is not the case. This summer Oldfarm opened up their home as a B&B and registered with AirBnB. So far it has received favourable reviews adding another string to its bow.

Similar to many producers Oldfarm has no marketing budget in the traditional sense however it has embraced social media. Margaret explained: “We had to look at other ways to market our product. While Facebook, Twitter, Pinterest, blogging all take up time, there is no actual monetary cost.  We could not have built up the market for our product without social media.” Indeed Margaret’s blog, entitled A Year in Redwood, won Best Lifestyle Blog at the 2012 Blog Awards.  It offers an excellent mix of humour, delicious recipes and an insight into the reality of working with farm animals. See it here:

Given how much Oldfarm has packed into the last couple of years no doubt we will be seeing more of them in the near future.

Image Alfie O’Farrell with his pigs