Off to marry in a Massey: Bride drives to wedding in style 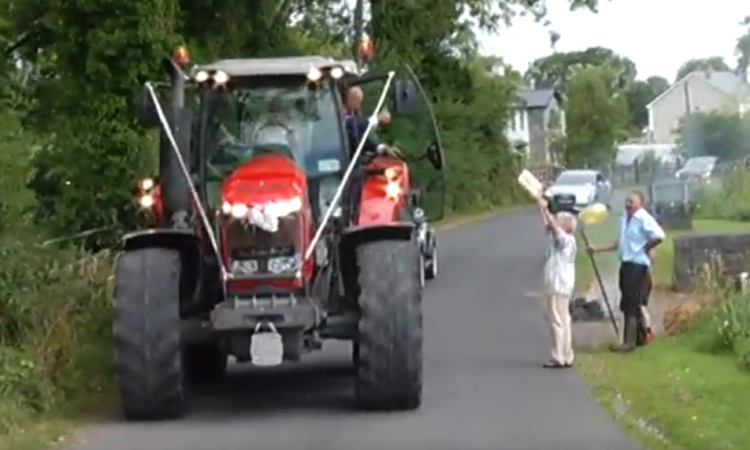 A video has recently emerged online of a Galway bride making her way to her wedding in style – on a Massey Ferguson tractor.

The video, posted on YouTube yesterday (Sunday, September 9) by Aidan Lee, shows the bride in question leaving her house to travel to the church on a Massey Ferguson 7620.

Neighbours line the road to wish her well in the footage, which is supplied with the apt soundtrack ‘She Thinks My Tractor’s Sexy’.

The bride in question, Nicola Kelly from Kilkern, Co. Galway, spoke to TheVow.ie, explaining that her father suggested abandoning original plans of a Rolls Royce, in favour of his ‘classy Massey’.

While Nicola’s father was originally to drive it, at the last minute it was suggested that she get behind the driving wheel herself, rising to the occasion magnificently.

Nicola is not the first bride to get behind the wheel of a high-powered MF on her wedding day.

Last year Aisling McCarey from Co. Monaghan drove herself and her father to Knockatallon Church in a Massey Ferguson 6499 which has over 200hp.

Also Read: Video: Farming mad bride drives to her own wedding in a Massey Ferguson

The rest of the bridal party also arrived in three other Massey Fergusons, two 6480s and a 6497 which were supplied by local agricultural contractor Tom Tierney.

Not to be outdone by his now wife, the groom Mark Graham organised that himself and his groomsmen would arrive to the wedding in two Scania trucks. 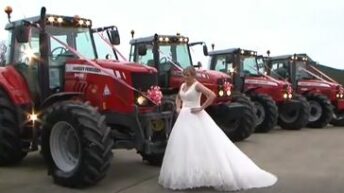 Video: Farming mad bride drives to her own wedding in a Massey Ferguson