Domestic milk intake by creameries and pasteurisers was estimated at 513.1m litres for October 2016, the latest figures from the Central Statistics Office (CSO) show.

The October milk production figure for 2016 is 4.3% below the corresponding 2015 figure.

Meanwhile, comparing the October 2016 milk production figures with those for October 2015, total milk sold for human consumption increased by 0.3 % to 43.6m litres. 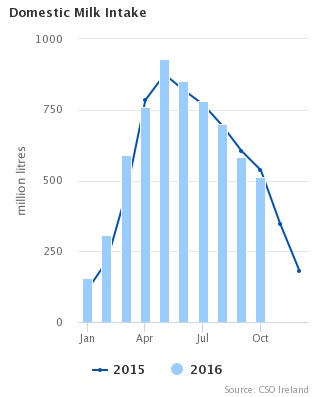 At EU level, the latest figures from the EU Milk Market Observatory (MMO) show that EU milk collections decreased by 3% in September 2016 compared to September 2015.

Milk collection figures were down 1.9% on August 2015, while July and June production was down 1.4% and 2.3%, respectively, on the corresponding months last year.

For the period January to September, milk production in the EU was up 1.5% on the corresponding period last year with Luxembourg, Cyprus, the Netherlands and Irelandrecording the highest increases.

Meanwhile, the latest update on the world dairy trade from Rabobank has found that we live in uncertain times, perhaps even more so than in recent years.

The election of Donald Trump as the President of the US and the new administration he brings with him, along with uncertain Russian trade relations could have an effect on dairy trade development.

Further uncertainty in the Middle East, Chinese economic performance, Brexit, and the fate of trade agreements such as the Trans-Pacific Partnership (TPP) and the Transatlantic Trade and Investment Partnership (TTIP) can also all have a major effect on dairy trade development, it contends.