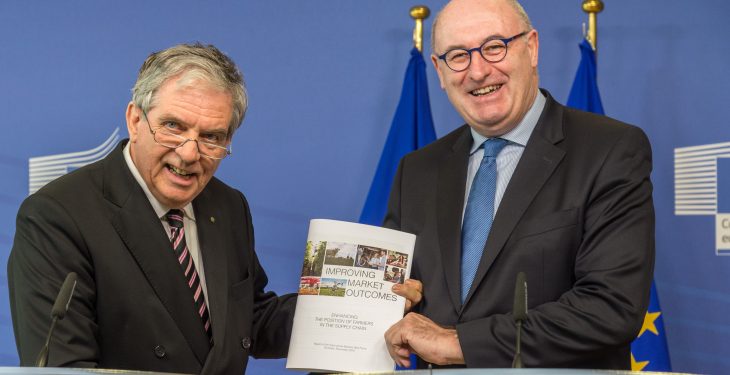 New rules at EU level to tackle unfair trading practices and increased market transparency were among the recommendations of a report by EU Commissions Agricultural Markets Task Force.

The Agricultural Markets Task Force today presented its recommendations on farmers in the food supply chain to the EU Commissioner for Agriculture, Phil Hogan.

Amid concerns that farmers are bearing the brunt of price volatility and prolonged periods of low prices, the task force’s report concluded that the policy framework governing the supply chain “can and should be further improved.”

Among the other conclusions, the report calls for new rules at EU level to cover certain unfair trading practices (UTPs), as well as the implementation of effective enforcement regimes in Member States such as through the use of an adjudicator.

Other recommendations from the task force include increasing market transparency, enhancing cooperation among farmers, facilitating farmers’ access to finance and improving the take-up of risk management tools.

The task force recommended to improve market transparency, mandatory price reporting should be introduced, as well as the provision of more timely, more standardised data.

As regards UTPs, while voluntary initiatives have been useful, they have fallen short of introducing effective and independent enforcement.

Framework legislation should, therefore, be introduced at EU level as well as supporting effective enforcement regimes in Member States, such as through the use of an Adjudicator.

There are also recommendations on mandatory written contracts, which would also benefit farmers.

In terms of enhancing cooperation among farmers, the task force recommended that the rules of collective organisation and competition law should be clear and workable, in order to genuinely enhance the opportunities for farmers to cooperate.

To facilitate farmers’ access to finance, the task force found that there is potential from the greater use of financial instruments, in relation to which there is a role for the European Investment Bank (EIB), which could also be involved in the development of a possible export credit guarantee facility.

On the question of risk management, existing tools should be improved, according to the task force.

Futures markets offer farmers a further tool, but it found that more needs to be done in terms of raising awareness and training.

The European Commission will now consider the report’s recommendations and an appropriate policy response in line with its continuous support to the agricultural sector.

Established in January 2016, the task force also looked at a number of issues that will inform the debate about the Common Agricultural Policy (CAP) post-2020, underlining the challenges from those posed by the climate challenge as well as shortages of water and fossil energy.

It refers to the importance of remunerating farmers for the provision of public goods and services. The report also suggests the possibility of introducing integrated risk management policy elements at EU level.

Finally, it underlines the importance of research and innovation – and attracting new young farmers into the sector – in responding to the challenges ahead.

Accepting the report, which reflects the result of 10 months work, Commissioner Hogan said that in view of recent difficulties in some specific sectors, the Commission identified the need to strengthen the role of the farmer in the food chain with the objective of ensuring that he/she gets a fair return for their produce.

Strengthening the voice and position of the farmer is a major priority for me. The report of the Agricultural Markets Task Force is a very welcome addition to the debate on how to achieve this.

“We will now prioritise our consideration of the report and its recommendations with a view to delivering the appropriate policy response.

“The importance of the issue is already acknowledged in the Commission Work Programme for 2017 and today’s report will play a key role in the delivery of this commitment.”

The establishment of the task force, made up of 12 independent experts, reflected increased concern regarding global developments in the food supply chain and, in particular, the position of the producer in that chain.