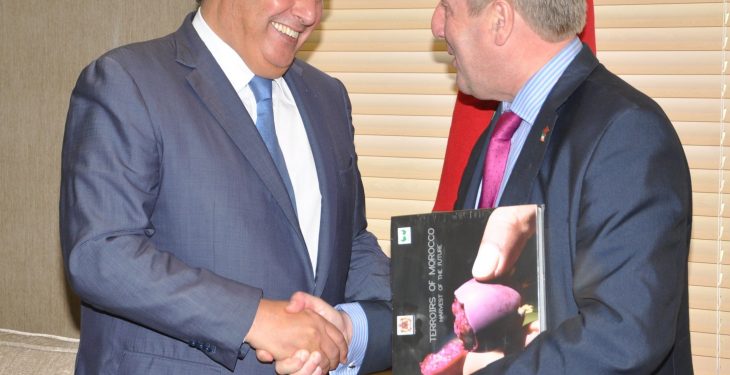 The Minister for Agriculture, Michael Creed, has said that the Moroccan market offers great hope to Irish exporters.

Minister Creed lead a delegation of Irish agri-food exporters on a trade mission in the Moroccan capital city of Rabat – the first stop on the trade mission to North Africa.

Speaking from Rabat, Minister Creed said that this is the first ever Ministerial led Irish agri-food trade mission to Morocco.

“My objective is to raise the profile of Ireland as a source for safe, secure and sustainably produced food.

While there is existing and growing trade in Irish products here, we know that the potential is there for this to significantly grow.

“This trade mission is an example of my ongoing focus on the diversification of markets for our Irish agri-food exports, particularly in response to Brexit,” he said.

Trade between Ireland and Morocco grows

As part of the proceedings, Minister Creed commenced the visit with a high-level bilateral meeting with the Moroccan Minister for Agriculture, Mr. Aziz Akhannouch.

These talks focused on the scope for deepening the collaboration in agriculture and food between both Countries.

“Trade between Ireland and Morocco continues to grow across many different sectors of the economy, especially agri-food.

“I was delighted to have the opportunity to reiterate our commitment to furthering this relationship today in my meeting with Minister Akhannouch.

“It is clear that the sustainable intensification of our respective agri-food sectors is a national priority for both countries.

“I also took the opportunity in these bilateral meetings to further our trade priorities, building on our growing exports here which to date in 2016 are almost double what they were for the whole year in 2014,” he said.

The Minister also met with the Director General of ONSSA which is the Moroccan body responsible for food safety.

The Minister also took the opportunity in the meeting to formally commence Ireland’s application for sheepmeat to the Moroccan market.

Irish dairy exports to Morocco to grow by 60%

Later the Minister, accompanied by members of the official delegation, met with the Director for the Agency for Agricultural Development (ADA) in Morocco.

This meeting focused on the plans for modernisation of Moroccan agriculture and the cooperation which Ireland might offer in this regard.

At the conclusion of the political meetings the focus turned to commercial events starting with a visit to one of Morocco’s largest importers of dairy products, Copralim.

This company is an existing importer of Irish dairy products from various Irish suppliers. Commenting on this visit Minister Creed said:

“Irish dairy exports to Morocco, particularly butter, cheese and caseins were worth almost €13m last year and we expect this figure to grow by over 60% in 2016.

“Increasing our share of emerging markets such as Morocco will be key in helping to meet the ambitious targets for the dairy sector in the Food Wise 2025 Strategy,” he said.

100 guests to see the best of Irish produce

Tonight, the Minister will host a trade reception to further highlight the offering which the Irish agri-food can bring to Morocco.

This reception will be attended by approximately 100 guests including many local businessmen and food industry representatives thus providing the visiting Irish commercial participants with an excellent networking opportunity for local contacts.

“Morocco enjoys many of the characteristics that make it a potentially attractive market for Irish food exporters.

Its stable market-based economy and its proximity to Ireland are among the factors which make it an attractive option for exporters.

“For our part we can provide Moroccan consumers with the assurances they need on food safety, food security and sustainable food production.

“The priority on this visit is to raise the profile even further.

“I am more convinced than ever, as are the Irish companies here on the trade mission, that the agri-food relationship between Ireland and Morocco is only beginning and offers great hope for the future,” he said.