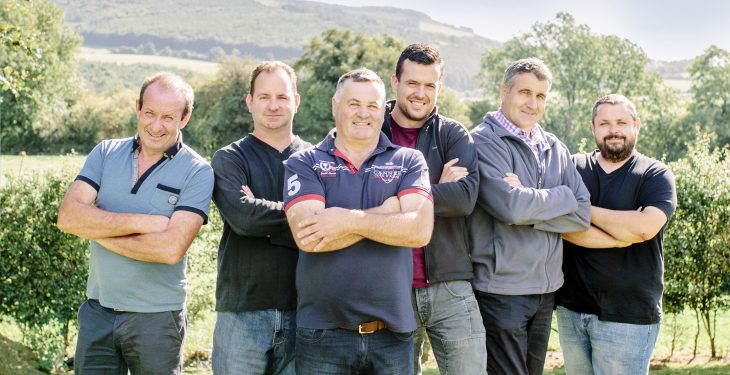 He is currently milking 125 British Friesian cows on a spring calving system. Cows are currently averaging 19kg milk at 3.87% protein and 4.57% butterfat.

“Originally I was considering a new 18-unit parlour. Then I joined forces with some neighbouring farmers to look at all types of milking parlours.

“The group was led by the late David Drohan who decided to look into milking robots. We reluctantly met with Lely and our minds then shifted towards milking with robots full-time.”

We continued to meet up every Tuesday for the next two months to do more research on robots. We travelled all over Ireland and to The Netherlands to look at robotic farms before taking the plunge.

Going down this route with his neighbours, made him more comfortable with the challenges that were ahead, and the group continues to meet up regularly since, he said.

“As a group we chose Lely because we were confident in the levels of backup and their experience in robotic milking and grazing.”

With a rapidly growing customer base in the southeast the local Lely Center provides access to a customer discussion group.

“I am a member of the local Lely robot discussion group in the south east. We meet up once a month to run through different things we are experiencing.

The lads from Lely advise on how to get the best from our robots, we also look at areas of grass growth, cow health and heat detection.

“Robotic milking is very interesting and as a group we all have the same interests. You are always learning new things and I feel it is helping me farm better.”’

“A grazing system with robots may seem complicated to someone looking in from a distance however I got to grips with it very quickly.

“The Lely lads installed my automatic grazeway gate early so my cows could get used to it before calving.

“I have become a better grassland manager, I don’t over complicate things, I like to keep things simple.’”

Shanahan found that the heat detection collars have helped him improve his herd fertility.

“I know exactly what cows are in heat and I don’t have to spend all day watching them either. The cows are automatically drafted into a pen for the AI man.

“My overall calving rate has sharpened up so much since installation. I would advise anyone to put in heat detection with their robots.

“My cows are walking a maximum distance of over 1km to be milked but I actually have less lameness than I had before.

“I only have a handful of cases in the year. Now I can watch a hurling match and I don’t have to worry about milking 125 cows after it.”

The Waterford farmer said that he has had “heaps of support from the Lely lads” since installation.

“They helped plan my shed as well as my paddock layout and during the start-up helped me train cows. I avail of FMS (farm management support) support regularly from the local Lely FMS advisor.

Michael Shanahan along with his family and Lely Center Enniscorthy are inviting farmers to come see his 2x Lely Astronaut A4 automatic milking systems in Whitestown, Clonea Power, Co. Waterford on Thursday September 29 from 12 – 6pm.