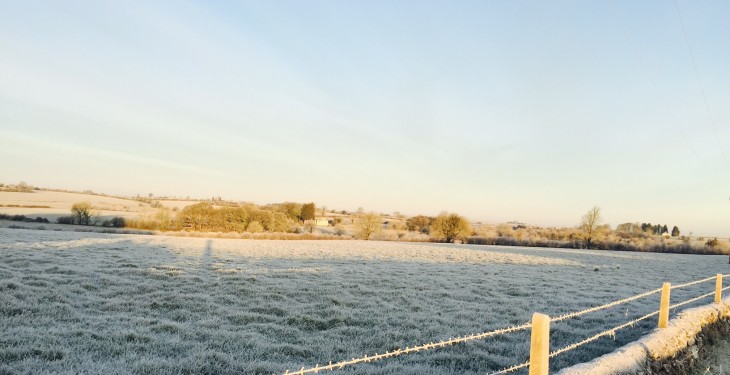 Met Eireann has issued a low temperature warning for Munster and Leinster.

It says air temperatures as low as -5 or -6 degrees Celsius will occur tonight.

Met Eireann says the low temperatures will give rise to a sharp to severe ground frost widely but turning less cold in the North and Northwest later.

Latest forecast suggest the cold, mostly dry weather is expected to continue for the rest of the week, over the weekend and early next week.

Met Eireann says temperatures won’t be as low coming closer to normal values over the weekend but we can still expect frosty nights.

Tomorrow: A lot of cloud is likely in the north and west on Thursday, giving showery outbreaks of rain or sleet in places; some wintry showers may develop on south Leinster coasts also as the day goes on, otherwise the south and southeast will have sunny intervals. Winds remaining mostly light, northerly. Highest temperatures 5 to 8 degrees Celsius.

Thursday night : Thursday night will be mainly dry, but a few light wintry showers may occur along southern and eastern coasts. Widespread frost also with icy stretches and lowest temperatures of -1 to -4 or -5 degrees C. coldest in northern counties. Some mist and fog patches developing later in the night as winds fall light.

Friday: will be cold and mainly dry with light winds. There will be a good deal of cloud with a few light wintry showers, mostly in northern or eastern coastal areas, some sunny spells at times also. Maximum temperatures of 3 to 6 Celsius and cold and frosty on Friday night with fog in places also.