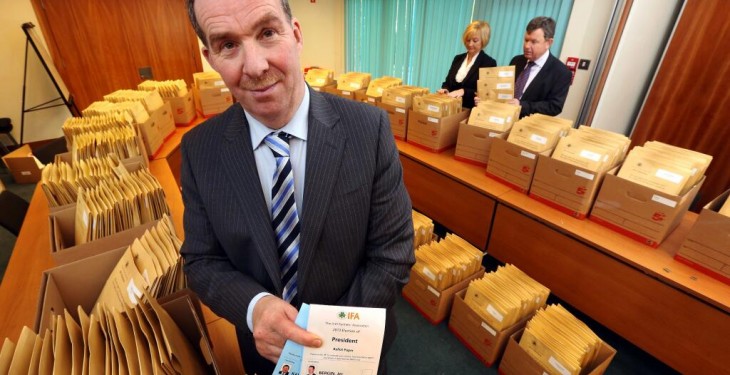 Voting to elect the 14th president of the Irish Farmers Association (IFA) will get under way in IFA’s 946 branches across the country on Monday and conclude next Friday.

Advertisement
IFA national returning officer Michael Keane has encouraged farmers to attend the association’s branch AGMs and vote for the positions of president and deputy president.
Keane said the election is an opportunity for IFA’s 88,000 members to decide who will lead them for the next four years. “The IFA election is unique as it allows every member the chance to hear what candidates are offering and then they have a vote in the national contest.”
In the top race, south Leinster vice-president Jer Bergin and deputy president Eddie Downey are vying to become the next president of the IFA. The association’s national treasurer JJ Kavanagh and Cork Central Farm Business rep Tim O’Leary are running for the position of IFA deputy president.
The national count will take place in the Castleknock Hotel in Dublin on Tuesday, 17 December. The next president of the IFA will take up office on 14 January, 2014.
IFA national returning officer Michael Keane
Eddie Downey IFA
Loading Next Story