Animal health scientists are making significant progress on mastitis management, which is responsible for up to 85% of the antimicrobials used in the dairy sector, according to the International Dairy Federation (IDF).

The document revealed that most IDF member countries reported a large reduction in the rate of clinical mastitis over the last 10 years – of which Staphylococcus aureus remains the main factor responsible.

Scientists investigating the microorganisms responsible for mastitis have reported that there is no apparent emergence or progression of resistance to the most commonly-used antimicrobials for treating bovine mastitis by S. aureus.

However, these studies need to be extended to other bovine mastitis pathogens, the federation says.

The author of the analysis, Dr. Olav Osteras, chair of the Standing Committee on Animal Health and Welfare, and Dr Maria Sanchez Mainar of the IDF, have said that implementing selective dry-cow therapy is the way forward.

The mindset of farmers and veterinarians and their attitude towards the reduction of antimicrobial use are crucial for successful implementation of selective therapy at dry-off, the representatives have said.

Dr. Sanchez Mainar said: “The elimination of an antibiotic shield does not necessarily have to result in a higher rate of new intramammary infections.

By modifying the known risk factors and by optimising herd management, risk levels can be equally low as when prophylactic antimicrobials are used.

The World Organization of Animal Health (OIE) is collecting data on the use of antibiotics in animals and has proposed the use of animal biomass as denominator for easier comparisons of antimicrobial consumption patterns between regions and countries.

One IDF action team is currently working on improving the detection of intramammary infections, both clinical and subclinical, with sensor systems, and aims to provide guidelines for potential interventions to the farmer. 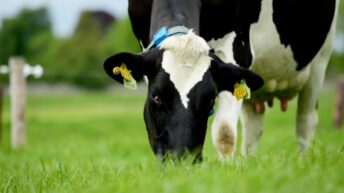 US milk production continues on its upward trend