Lead Analyst with the UK based HGCA, Watts said we have become very used to, in recent years, the general correlation between grain and crude oil prices.

“This occurred through the emergence of the biofuel industry and, to an extent, via investors viewing commodities as a ‘basket’ of investments,” he said.

According to Watts while the biofuel linkage remains, the presence of inclusion mandates offers some protection from the pure economics of biofuel production. Inclusion mandates are US government policy which requires the use of biofuel in gasoline.

The graph below shows the price of wheat, maize and sugar as a proportion of the crude oil price. 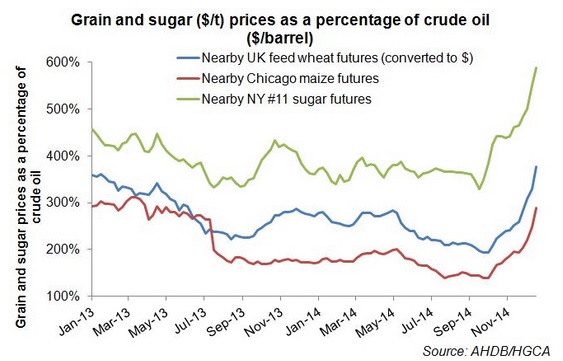 “Essentially, grain prices fell faster than sugar through 2014 – creating more incentive for the world to use more grain based ethanol to meet inclusion mandates.

“This goes some way to explain why US ethanol production has been so strong recently, but does mean though that grain markets can’t afford to move out of line with sugar,” he said.