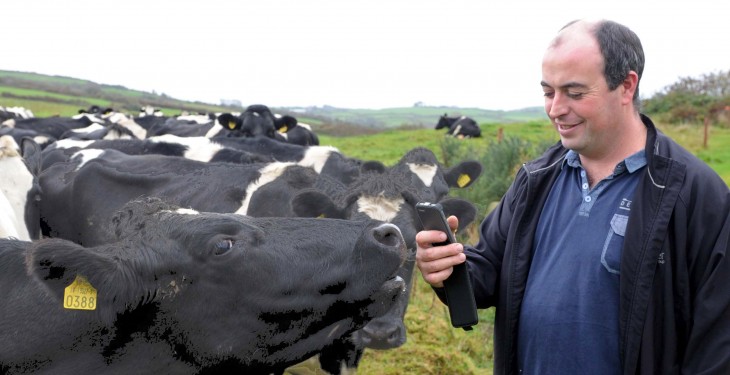 Noel Collins is a dairy farmer from Leap in West Cork, where he milks 70 cows a day on his own, and that’s not even his day job – as Noel also works as a driver.

In 2012, he won an Excellence Award at the National Dairy Council quality milk awards, and in 2014, Noel signed up to the Herdwatch farming app which has greatly reduced his paperwork and given him more free time.

Almost two years on, we catch up with Noel to see how exactly it has helped him.

Noel’s day starts early with a 5.30am milking, he then goes driving for the day and returns to do the evening milking.

After all that, the paperwork still needs to be done!

Now with Herdwatch, life is much easier, and he no longer has to worry about record keeping late at night.

“I can register my calves as I tag them, on the spot, and record remedies on the go. Before Herdwatch, I was spending hours in the evening recording remedies or calf registrations. Now, that’s all gone and I’m always compliant.”

“Simple things like knowing what cows are still in withdrawal are critical these days.

“It’s easy when all your records are in your pocket. I can then quickly check what cows are still in withdrawal, it’s only a matter of looking at my phone.

“There can be no grey areas when you’re producing food, particularly when you’re in the Bord Bia schemes.”

Breeding Records are a must

“You can record the scan results as he is scanning the cows, I can tell to the day when my cows are due to calve, even with no internet access.”

Herdwatch also sends breeding records to the ICBF, which eliminates having to re-enter all that data.

Noel weighs his growing Heifers at least 4 times a year and records this through Herdwatch.

“It’s great because it will give you the Average Daily Gains of your cattle from the previous weighing,” he said.

Noel is part of a community of over 1,700 farmers using Herdwatch, and at less than €2 a week, the app is great value for money and can be used on multiple smartphones, tablets and computers at no extra cost.

A free trial of the Herdwatch App is currently available on www.herdwatch.ie. For more info or to request a callback text ‘frs HW905’ + your name to 51444.