Farmhand became the exclusive Irish importer for Krone in 1962. The success of all Krone disc mowers is based on perfect performance, unmatched longevity and the SafeCut system protecting the buyer’s investment.

Edward Delahunty of Delany Agri Services, Kilmanagh, Co. Kilkenny, swapped from a competitive brand mower to a set of Krone Triples, the B870 and 320 front mowers with groupers, in 2015. He explained:

We moved from another brand into the Krone mowers and initially we were a bit hesitant to swap but today we would definitely go back and buy another set of Krone.

Edward also runs another set of 320 mowers both side and front mounted on another JD 155R.

“They are a good set of mowers; they do a good job and they’re light. They are very light on the road compared to the last brand we had,” explained Edward, adding: “They are very user friendly; the man that designed the Krone mowers definitely thought of the driver.”

Krone mower combinations offer professional farmers and contractors the specification and operator comfort they deserve; a large work width and enormous efficiency as well as ease of operation and excellent handling.

“We were commenting the other day that we’ve had that tractor since 2017 with no tool box on it, where before you wouldn’t go without a rachet set and definitely not without a 19 spanner,” explained Edward.

He continued: “If you had to open a blade and the nut was wrong you’d know all about it. Today, with the Krone mowers the lad just gets out and changes the blade without needing a rachet set or anything.

“We’re running a set of two and triples because we’re trying to be in two places at once to keep everybody happy,” Edward added.

Contractors today are under the constantly increasing pressure of tight harvest times, labour shortages and increasing customer demands. It is vitally important that a contractor has a machine he can trust to achieve the high work rates demanded of it.

With the mower set up, Edward commented: “You would knock out 200ac a day with them two, not overly pushing on, running at around 11.5 km/h.

“We could push on to 13km/h but it can get a little hard on the tractor and she gets a bit hot. If you’re able to knock 200ac in a day and then go the next day and knock another 200ac you’re doing well. 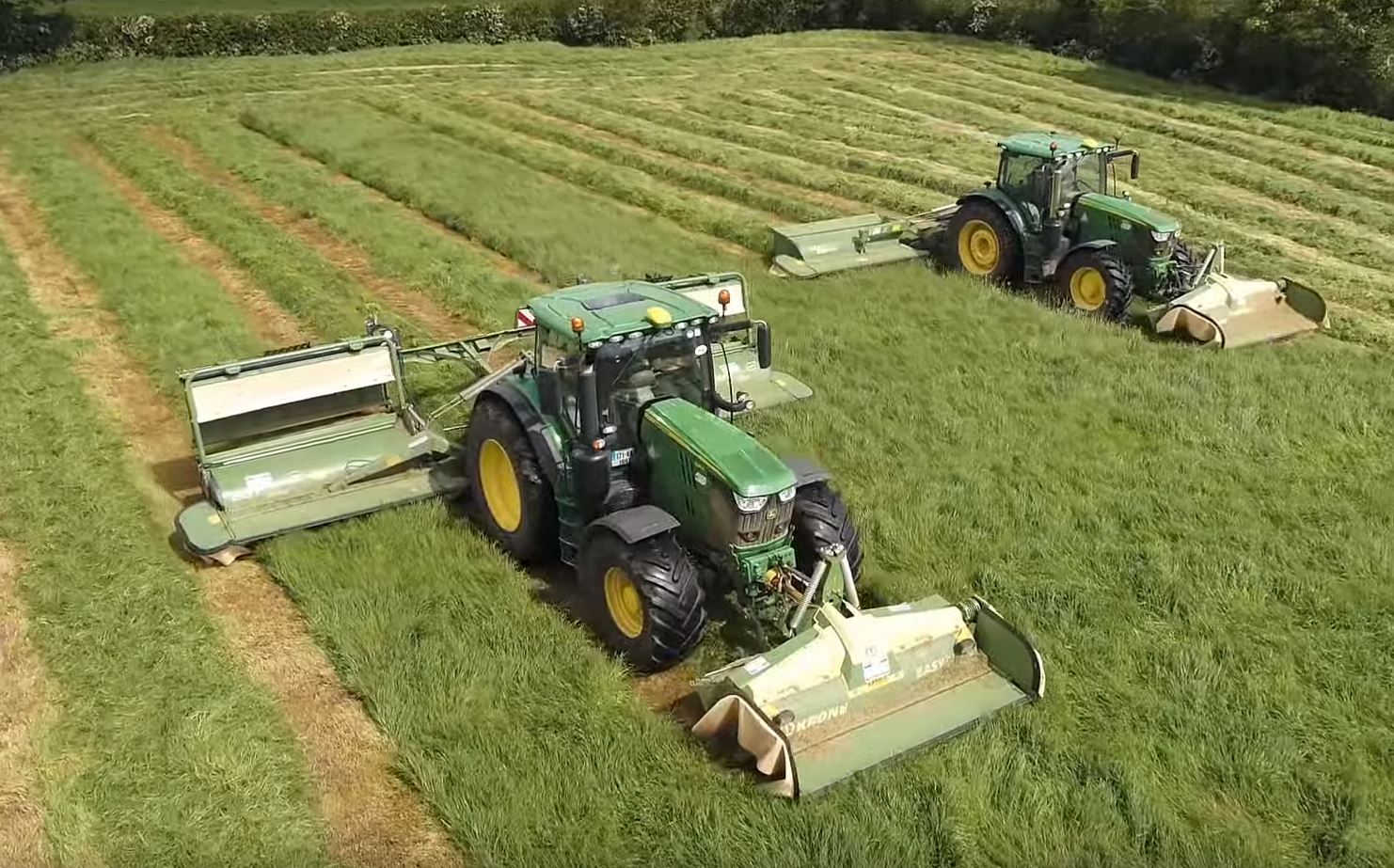 “The last mower we had did have solenoids, but there are no solenoids in the Krone. If the right mower doesn’t drop or any electrical issues occur then they are very easy to fix on a Krone,” explained Edward.

“There is just a box to put in. Right mower; left mower up and down; a switch for swathers; on and off. It’s not complicated and we’ve had no issues or down time with the Krone mowers.”

The situation is familiar to every farmer or contractor – a disc hits a foreign object, gets damaged and needs replacing. In this situation, Krone SafeCut offers maximum protection.

SafeCut is a system in the mower bed with a shearbolt in the hub of the mowers. If you hit something the hub pops up and snaps the shearbolt, so it doesn’t snap the gear down in the bed beside the hub.

“On our last set of mowers from another brand I did hit something and it cracked the gear in the bed and the whole bed had to be replaced at a considerable cost.”

The disc shear-off system brings a new level of protection and operational reliability to Krone mowers and comes as standard on all EasyCut disc mowers.

“This SafeCut system is a very good system on Krone. If we did hit something and broke three discs and three hubs, you would literally be going again within an hour,” concluded Edward.

For more details on the range of Krone mowers or features available, you can find your local Krone dealer online, or contact Cormac Megaw on: 087-905-5393.