Keeping the faith in Athenry 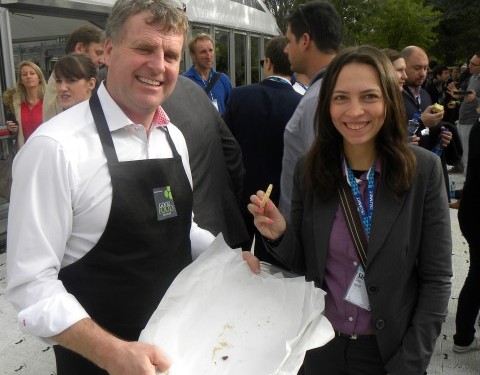 “The only chemicals you’ll find in our bakery is for the toilets and the floor,” commented Paul Lawless owner of Foods of Athenry who is one of the Good Food Ireland producers at the Food Summit in Herbert Park today.

According to Lawless: “We have always made food that’s free chemicals, preservatives and additives.  It’s a concept that people need to understand, chemicals are not supposed to be in food.”

On the Food Summit he said:  “This is absolutely amazing I have never seen such a crowd of people coming for food at one time. 2,000 people per hour coming through the doors. The reception for the food is fantastic.

“Everything that I do is gluten free .It’s a family-owned business in a converted milking parlour. We’re based about five miles outside Athenry in Galway. I used to be a dairy farmer. I have a low-lying farm that we converted gradually from dairying to baking in 1998.We made the big move to gluten-free foods in 2008. We just noticed that there is an upsurge in people looking for healthy food.”

Lawless explained: “It has been a tough few years with the economic downturn. That’s why we are now mainly focused on gluten-free foods. In 2008 was saw a change in the way that people were spending their money and what they were spending it on. Quality food went further down the need chain than we would like. People in some cases just don’t have the money.

“So we looked at where the market was evolving and developing. We decide to invest in the gluten-free side of it. I spent about a €500k in developing the gluten-free bakery. Then in June 2011 it all burnt to the ground in a fire. So I was back to square one. But having faith and belief in the quality and range of products that we had, we decided to reinvest everything, rebuilding the business. Now we are focused on the gluten free side,” he added.

Lawless said Foods of Athenry is now solely focused on the gluten-free side of the industry.

“It’s  an evolving and growing market. We have one of the biggest ranges of gluten-free foods in the British Isles that’s manufactured and developed by one single company. It makes us unique in that sense. It is evolving all the time and an event such as this is only giving it more focus.

“Most of the desserts being served today are gluten free. This is showing the way the industry is going. The feedback has been extremely positive from the delegates. Lots of people are saying that gluten free is the way to go, which is reassuring for us.”