KEENAN: Providing benefits, both home and away 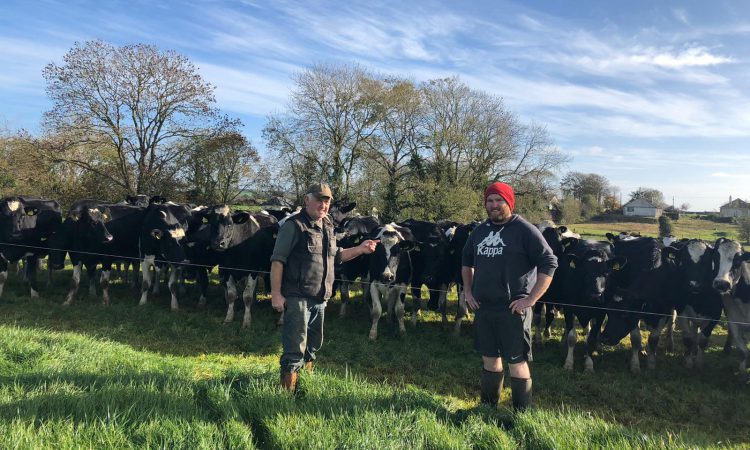 Denis Gallagher is a young farmer who, along with father John, milks 230 cows across two blocks. The farm is situated outside Glanworth, Fermoy, a strong dairy region in northeast Cork.

While Denis studied dairy herd management in Clonakilty Ag College, his initial aim was not domestic farming. Instead, after finishing his course, he made the decision to travel and explore new parts of the world.

In September 2011, Denis headed off to Australia to spend a year working on a large-scale dairy farm. However, like many Irish who travel abroad, his stay lasted longer than he intended, and Denis’ one year turned into a total of five.

The scale of the dairy system where he worked was a huge change. It was during this time he learned about total mixed ration (TMR) feeding and was introduced to KEENAN.

It was through working with the farm owners that Denis began to understand the core concept of the KEENAN system, the importance of structural fibre in the diet and the difference in mix quality produced by the KEENAN machine.

“When I was over there, I got experience of a TMR system, and you see the importance of feed intake, how feed is mixed and chopped,” Denis said. “It’s critical to have the right fibre length for cows. If the straw is chopped too fine, it’s no good; they’ll pass it through the system.”

With the travel bug out of his system, Denis moved back to Ireland in late 2018. At this stage, a neighbouring farm came up for lease, and after discussing with his father John, the pair decided to take it on and expand the herd.

“There was a neighbouring farm up the road, a block of about 60ac with a milking parlour. We took that, and I moved in there when I came back home. At the time, we were milking about 120 cows.”

Denis, fresh with knowledge and new perspectives from his time in Australia, was keen to hit the ground running with the dairy business on his return home. Among new investments was the purchase of a KEENAN MechFiber 360, fitted with a bale handler, KEENAN controller and InTouch nutrition support.

John now milks in the home farm, with Denis running the operation on the outside farm.

“We are milking about 230 cows now between the two farms. The cows are predominately British Friesian. Dad would have always had a British Friesian herd, but we have introduced Holstein in the last few years.”

In his first two years since returning home, Denis has already seen significant improvements in herd performance. He attributes this to dry cow diet, improving diet and feed intake, as well as an increased focus on grassland management.

“Last year, we did about 5,000L/cow. We are going to beat that this year. I’m expecting to be up about 1,000L/cow this year. I have improved grassland management, as well. We’re grass measuring now this year, and it’s a big help. I haven’t had to go in with silage yet to cows. We built up a good reserve of grass in August and September.”

Even with only a short window to implement a dry cow diet in his first year with his new KEENAN, Denis saw immediate results in improved herd health and cow performance at calving and in early lactation.

“Before the KEENAN, we had problems at calving left, right and centre — retained afterbirths, cows getting displaced stomachs. The first season we had [the diet feeder] we reduced it, and the second year, now, we have it pretty much wiped out (issues).”

The Controlled Energy High Fibre (CEHF) concept developed by KEENAN in the past makes up the foundation in dry cow nutrition on thousands of farms all over the world. Denis, like so many farmers, understands the importance of this period in setting the cow up for better performance in the subsequent lactation.

This year, in his first full year of working with KEENAN and InTouch nutrition, the Gallagher herd is up 45kg MS/cow for the first eight months of lactation. They are on track to sell 500kg MS/cow this year.

To arrange a remote farm assessment with an InTouch feeding specialist and to discuss how KEENAN can help improve your herd’s performance, just click here