Up to 3,000 to 5,000 people are expected to attend one of the largest county shows this weekend and organisers are keen to stress the GAA fixtures will be displayed on the big screen at the show. The Minister of State at the Department of Agriculture is set to launch the show.

Every year the Laois-based Ossory Agricultural Show offers the best of country living, entertainment and a great day out for all the family.

This unique event, which has been running for over 115 years, attracts visitors from all corners of the country thanks to its ideal location in Rathdowney, in the heart of Ireland and it is presented this year in association with The Gathering and Laois Partnership.

This is indeed a family show with something for everyone. There are more than 290 categories of prizes spread across cattle, sheep, horses, ponies, poultry, crafts, eggs, baking, vegetables and flowers. 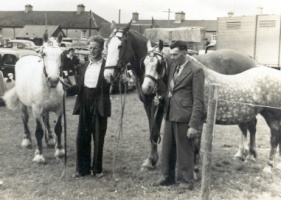 Every year the show delivers new and exciting categories for judging and entertainment. Among the new categories on offer this year are classes and exhibitions in the art of ladies side saddle riding, a display of vintage John Deere tractors, a mighty tractor pull, sheaf tossing and a gate prize of a B&B getaway to the Aisling Hotel in Dublin.

The Ossory Show was founded in 1898. Its central position is within easy reach from all parts of Ireland and has easy access from the new M7 and M8 motorways. The show was named after Lord Castletown its local patron, who was the Baron of Ossory. He lived at the nearby Granstown Manor, part of which is still standing. The Ossory Show originally took place at the Donaghmore Workhouse Museum and moved to Rathdowney in 1915. 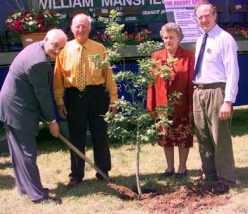 Previous minister of State at The Department of Agriculture Ned O’Keeffe plants a tree to mark the occasion at the Ossory Show. Included are Lar Broderick, president; Irene Newman, secretary and Martin Phelan, chairman.

Also in 1915, the Department of Agriculture for Queens County (as County Laois was previously known) gave a grant of £100 towards the running of the show. It has since been running continuously for over 100 years and has kept up with the changing times. The show took the title of Laois County Show in 1927, and affiliated with the Irish Shows Association in the 1940s.

The Show moved from the showground in Rathdowney to a temporary site at Ballacolla in 1999. In the year 2000 it moved to its present, permanant position at Coolfin, just outside the town of Rathdowney.

The show has a large variety of classes including qualifiers for Cattle, Sheep, Horses, Poultry, Dogs, Flowers, Vegetables, Baking, Crafts, Produce and a va

riety of children’s competitions. The year 2000 saw the introduction of new classes such as Carriage Driving and Tractor Pulling. These events are supported by competitors and sponsors from all over Ireland.

One of the main attractions is the popular Hunt Chase, with teams competing from all parts of the country. There are trade exhibitors of all descriptions from crafts to horse tack. The show day is an enjoyable day out for all the family with many attractions and entertainments to capture the heart of everyone’s interest. There are plenty of parking spaces and refreshments, from hot dogs and ice cream. So if you want a great day out, just come along and enjoy the craic at the Ossory Agricultural Show On July 28.

The range of classes for the 2013 show includes:

The Non- Pedigree Suckler Cow and Calf All Ireland Championship