Is Healy pulling on the ‘green’ jersey for farmers?

With the ‘Green wave’ rippling through some parts of the country in the aftermath of the local and European elections, it’s unsurprising to discover party policy in relation to agriculture and the environment emerging from the swell.

Speaking from the All-Ireland Sheep Shearing championships to ‘This Week’ on RTÉ Radio 1 – on Sunday, May 24 – Irish Farmers’ Association (IFA) president Joe Healy indicated clearly that the wave was not an intimidating factor for either the IFA or the farmers of this country.

He also pointed out that not only was the sector on target to meet its responsibilities under the Teagasc Climate Roadmap, it had also contributed to reducing carbon emissions over the last 20 years.

Farmers and the Green Party have more in common than they have difference.

‘A roadmap to change’

The IFA president then went on to reference Teagasc’s Climate Roadmap and pointed to the fact that “agriculture is the only sector that has a plan in place”.

“We called on the Taoiseach last December to adopt a whole-of-Government approach by inviting the various departments and state agencies to implement and ensure that the infrastructure was in place so that the roadmap could be implemented,” he continued.

Ireland has the most efficient production of dairy products in Europe from a carbon footprint point of view.

“We are in the top five with regard to beef – this is what that roadmap is all about – farmers are open to this and willing to adapt the plan.”

Meanwhile, it was put to Healy during Sunday’s programme that the Green Party had indicated previously, that where fines were issued – because Ireland had missed out in its 2020 targets – farmers would be the ones who “took the blame for reckless and poor leadership from Government”.

It was also pointed out that the Green Party had indicated “that it was time that Irish agriculture started looking at adding value rather than volume to boost sales”.

In response to those sentiments the president said the focus should be on adding value to the product that was produced.

“Ireland has increased its agri-exports every year for the past nine years; this has created and underpinned over 3,000 jobs throughout and will continue to do this in a climate-efficient way,” Healy continued.

“Nine out of 10 measures in the Rural Development Programme (RDP) involve climate mitigating actions – this is the space that we want to be in.

“We are an exporting country; it is important that the countries we export to can point to the work we are doing on climate change.” 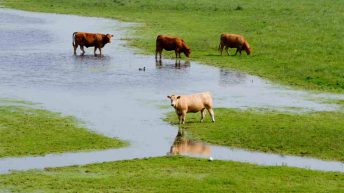 Can climate change present an opportunity for rural Ireland?