Is body condition loss the hidden cost in your dairy herd? Alltech thinks it might be

The main goal for spring-calving dairy producers is to calve their cows with minimal issues to ensure they are primed to go back in calf as soon as possible.

A key management factor that influences this is body condition scoring (BCS) and the aim is to calve cows at the correct BCS of 3. If cows are too thin at calving (<2.75 BCS), peak milk yields can be reduced and reproduction can be compromised.

Whereas, if cows are too fat at calving (> 3.25 BCS), they are more likely to incur issues such as milk fever, retained placenta, ketosis and uterine infections. These issues can in turn have a seriously negative effect on reproduction performance and can prove very costly.

Even when cows calve down in the correct BCS of 3, they still face many challenges that can compromise successful breeding. In early lactation, the cows dry matter intake (DMI) is reduced.

This DMI decline begins about two weeks before calving and continues for several weeks after calving. In this period, the cow’s energy requirement is higher than the amount of energy that she can consume (see Figure 1 below.) – this energy deficit is called negative energy balance (NEB). Due to the NEB, the cow mobilises body fat reserves and loses body condition. 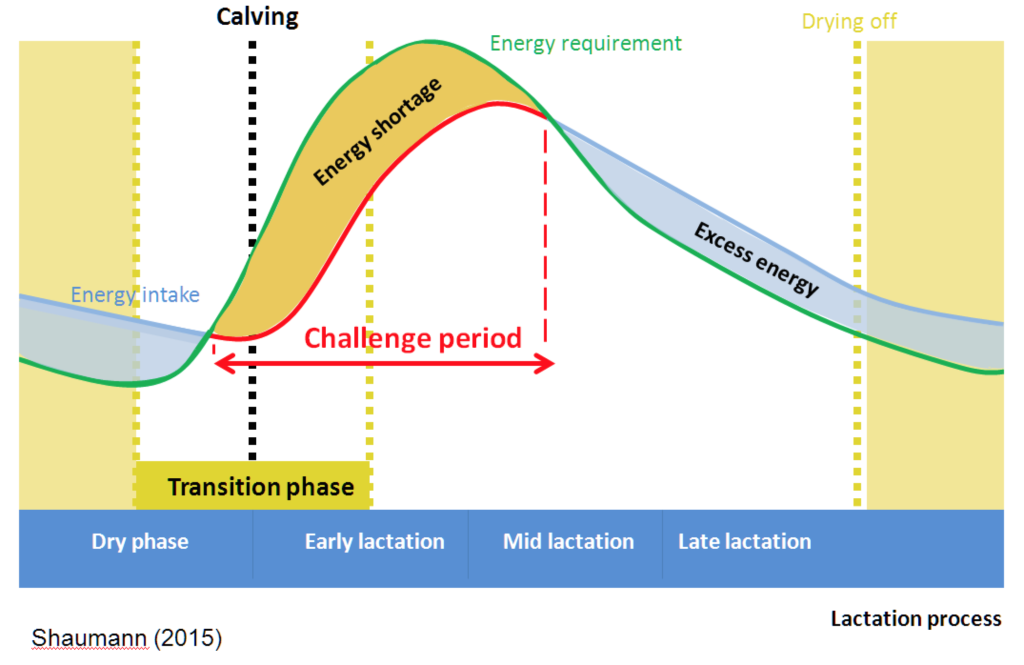 Poor fertility performance represents significant costs and research from Shalloo et al., 2014 highlighted that an improved six-week calving rate could be worth over €26,000 for a 100-cow herd.

In order to achieve improved target calving rates, dairy producers must strive to optimise DMI and energy intake for cows throughout the transition period to minimise the level and duration of NEB and BCS loss during early lactation. All cows will suffer from NEB and will lose BCS to some degree, but this loss should be kept to a maximum of 0.5 BCS.

This was reflected in the results with a significant increase in energy (volatile fatty acids (VFAs)) coming from the rumen when cows were fed YEA-SACC. The trial also highlighted that YEA-SACC fed animals mobilised less body fat reserves (non-esterified fatty acids (NEFAs)), an indication that cows were retaining better body condition.

In summary, the goal of early lactation feeding is to maximise feed and grass utilisation in order to increase dry matter intake as soon as possible after calving, this will in turn help to minimise body condition loss and increase fertility performance.

In association with Alltech.