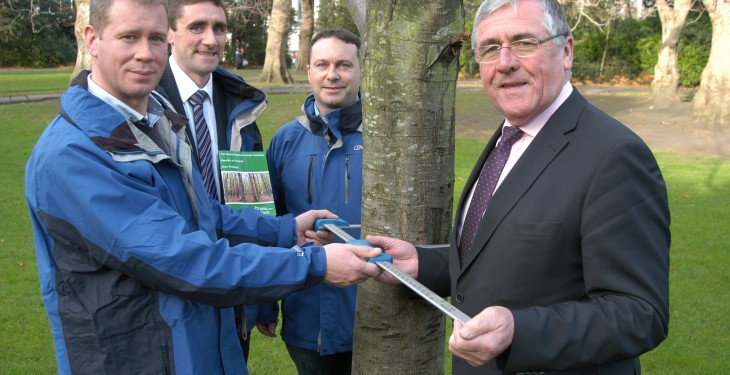 A report detailing the main findings of Ireland’s second National Forest Inventory (NFI) has been published this morning.

The inventory involved a detailed nationwide field survey of Ireland’s forests. The survey assessed composition, condition and change in the entire national forest estate, both public and private. The information encompasses the traditional parameters such as area, growing stock and species composition in the national forest estate as well as information with regard to biodiversity, health and vitality, carbon content and soil type. Changes in Ireland’s forests can now be assessed for the first time through comparisons with the initial NFI, completed in 2006.

Speaking at the launch this morning, Tom Hayes, Minister of State at the Department of Agriculture, with responsibility for forestry, said: “The second NFI, undertaken by staff in my department, gives us accurate, up-to-date information about the extent and changing nature of Ireland’s forests. This vital information will enable the sustainable development of our national forest resource. I am also pleased to note that this booklet is in a very accessible easy to read format and will be distributed widely within the forest industry.”

The minister pointed out that “our forests play a pivotal role in carbon sequestration. The NFI has been crucial in documenting the contribution of our forests in achieving Ireland’s Kyoto target. Without Ireland’s forests the first Kyoto commitment period target (ie 2008 to 2012) would not have been met.”

The minister also added: “Of particular interest to me is the large uptake in private thinning since 2006, with an extra 20,000ha thinned. We are finally beginning to realise the potential of our state supported afforestation schemes; the resulting enhanced thinning volumes represents an increasing source of raw material for the processing sector, a valuable source of revenue for private owners and a source of additional employment in harvesting, transport and downstream processing.”

All NFI publications, including the main findings booklet are accessible on the department’s website here.

In order to assess changes in the state of Ireland’s forests over time, Ireland’s NFI was designed using 1,827 permanent sample plots, which facilitated a repeat measurement programme. This robust reporting strategy was adopted to provide credible information to address strategic objectives and reporting commitments. The results of the inventory show that:

Conifer forest is the dominant forest type representing 74.2 per cent of all forests. Broadleaved forests represent 25.8 per cent. The main tree species is Sitka spruce occupying 334,560 ha or 52.5 per cent of all species. Less than 30 per cent of Ireland’s forests are single species forests.

Over half (56 per cent) of the national forest estate is less than twenty years old, due to the successful uptake of State supported afforestation in the intervening years.

The total standing growing stock of Irish forests is estimated to be over 97 million m³, an increase of over 25 million m³ since 2006. Ireland experiences a very favourable climate for tree growth, as shown by our forests average annual volume increment of 11.5 m³/ha/year.

The balance between increment and fellings is an important indicator of Sustainable Forest Management (SFM) in a country as it describes the sustainability of wood production over time, the current availability of wood and the potential for the future. Nearly half (47 per cent) of the gross annual increment was harvested between 2006 and 2012 – which shows sustainable harvesting levels in Ireland’s forests.

Over half (51 per cent) of the forest area had one or more environmental designation, compared to 43 per cent in the 2006 NFI results.Afforestation of blanket peat is declining, reflecting a shift away from the unenclosed land type. One-quarter of all forests are growing on highly productive gley soils while 33 per cent of  private  forests planted since 1985 occur on these soils, reflecting forestry’s move onto more productive soils since the mid to late 1980s.