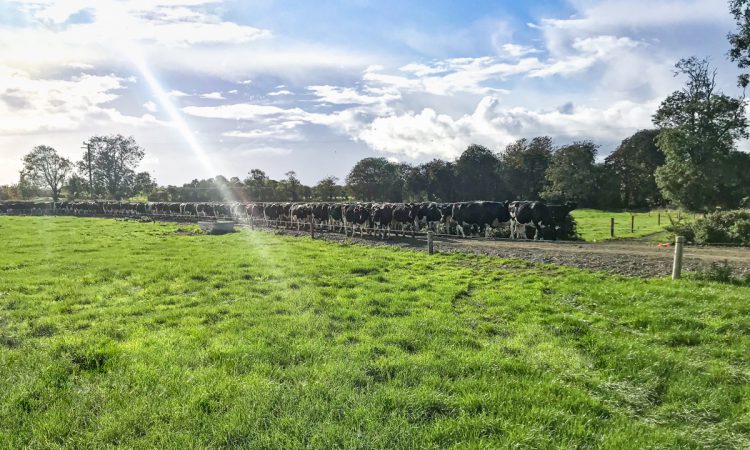 The O’Keeffe dairy enterprise located in Churchclara, Co. Kilkenny, is most definitely a family affair – with brothers Matt and Philip, and Philip’s son Bill – who is married with four young children – actively involved on the ever-expanding unit.

The farm was chosen by the Irish Grassland Association (IGA) to host a farm walk as part of the IGA Student Conference which was sponsored by FBD Insurance recently.

Bill, who heads up the operation, sat his Leaving Certificate in 1996 before completing one year at Kildalton Agricultural College. He was then bitten by the travel bug and spent a year or so working on various different farms in New Zealand.

Reflecting on this experience, Bill noted: “Whether it’s New Zealand or not – it’s totally up to yourself, but it’s great to see something different.

“Try and do something outside of farming as experience; some of the best farmers I know would have done something else before going home to farm. I wouldn’t be in a rush home; you have time enough going farming at 25 or 26 rather than trying to get home at 20,” he told the large delegation of students. 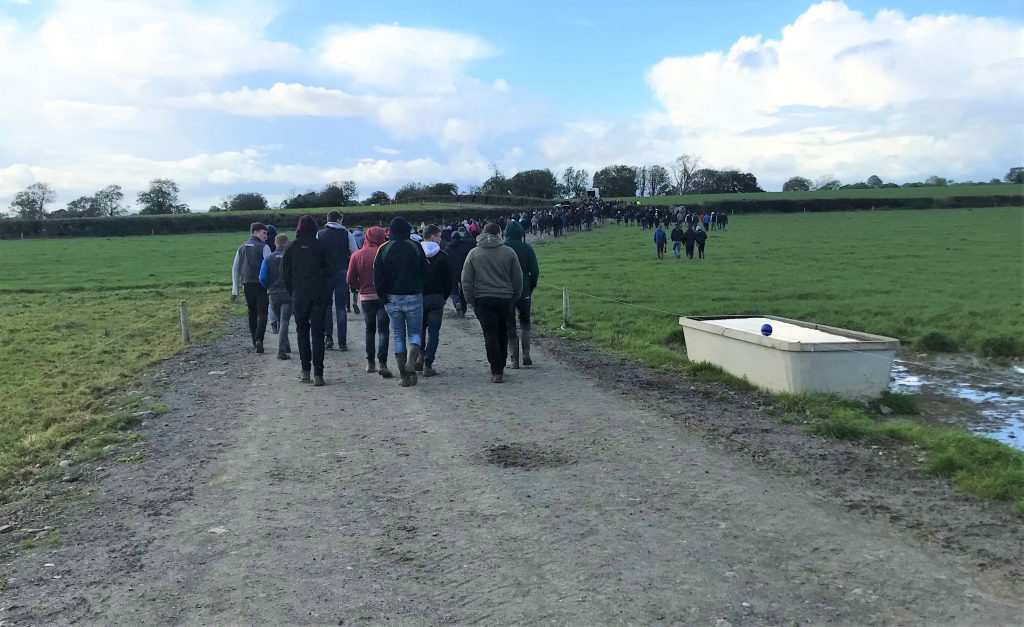 Even in his discussion group, Bill and other farmers travelled as far away as America and South Africa.

“We started by going to Cork and the north [Northern Ireland]. It was baby steps; we got together and travelled around Ireland, the UK and then a bit more.”

Bill returned home to the business in the early 2000s and, since then, cow numbers on the farm have grown to 300 in 2019. Several generations of the O’Keeffe family have farmed the land, with the original O’Keeffes moving from Blackwater in Co. Cork to the Kilkenny holding in the 1590s.

While dairying has always featured on the farm, Matt and Philip partnered up in 1979 after purchasing a block of land with the intention of driving cow numbers to 200 and maximising the returns from the available land base.

British Friesian bloodlines were introduced in 2003 and pedigree status was achieved in 2006.

However, milk quotas stood in the way of this target, with cow numbers hitting 130 head in 2015. The unshackling of the quotas, like a lot of dairy farms throughout Ireland, presented an opportunity for the holding to increase in size and production.

The total area farmed stretches to 200ha, with 80ha owned and 120ha leased; the milking platform extends to 100ha and carries a stocking rate of three cows/ha. Milk production, however, is not the only enterprise on the farm and extra replacement heifers are sold off the farm, in batches of 40-50 some years. 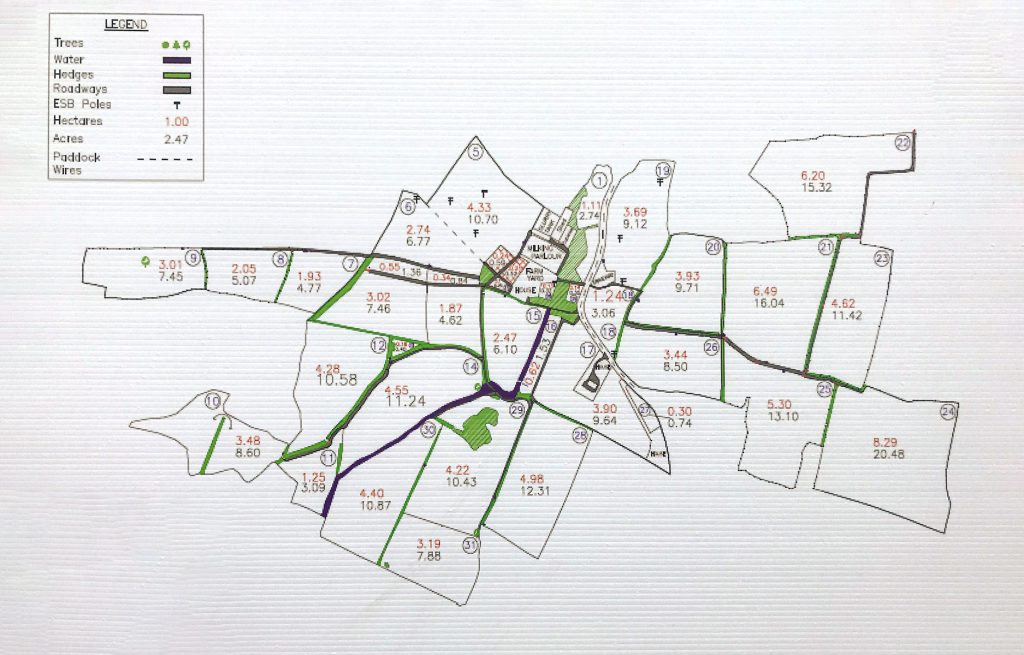 This number has now reduced to aid expansion on the farm.

“Before this, we would always have been selling a good few in-calf heifers; we place a lot of value on having a supply of heifers for regular customers,” Bill explained.

This brings the overall stocking rate to 2.48LU/ha. With the 100ha milking platform stocked at three cows/ha, very little silage is harvested from this and surplus grass is baled; these are fed out should the need arise. 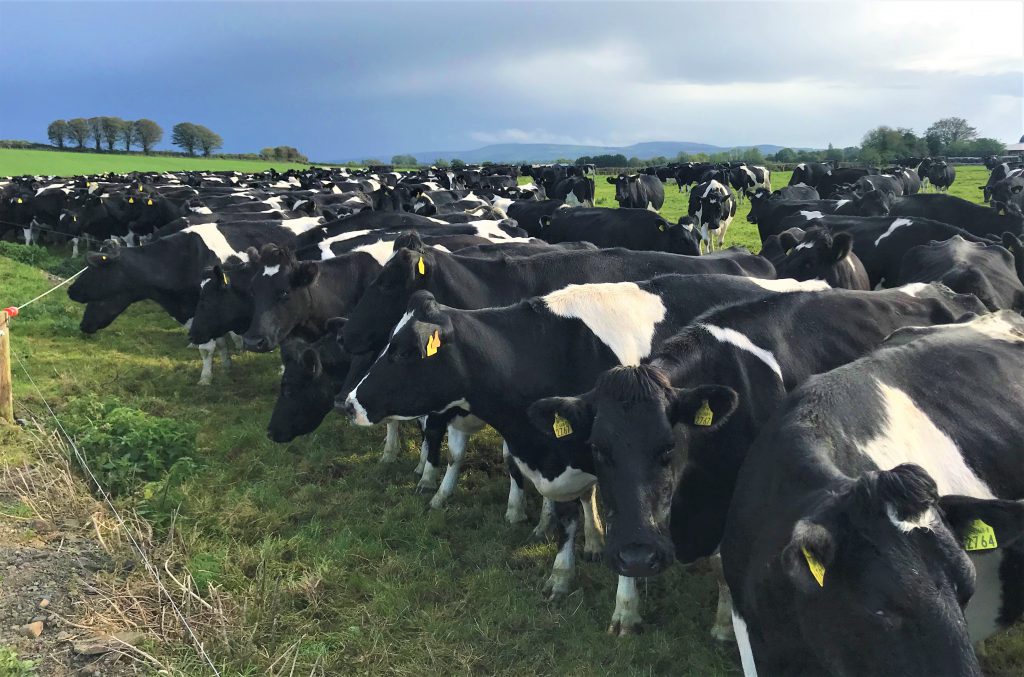 With so much going on on the farm on a daily basis, everybody involved including Bill, Philip, Matt, David and two part-time employees – Liam and Stan – play their part in the business and, admittedly, Bill acknowledges that plenty of man hours are clocked up.

A night shift operation is employed for a number of weeks over the calving period. This will involve: calving cows; bedding calf pens; training calves to the feeders; feeding; and slurry spreading.

Other duties include calf rearing, with replacement heifers and pedigree bulls being fed via an automatic feeder. All calves get adequate amounts of colostrum at birth and beef-sired calves are sold to neighbouring farms for finishing.

Three people milk in the mornings in the spring and two in the summer and autumn. Matt and Bill will mow grass for silage, before getting picked up or baled by a contractor.

Fertiliser is also spread by a contractor, while slurry is spread by Bill, Matt or David when time allows, with Bill taking care of paperwork; Matt carries out a lot of herding and winter feeding.

“When it comes to breeding, I step out of the parlour at that time of the year. I concentrate on heat detection exclusively for six weeks,” Bill said, while noting a team of bulls are used after AI; beef bulls used include Aubrac and Aberdeen Angus.

“Everybody mucks in and puts their shoulder to the wheel. It’s a ‘we’ rather than ‘I’ farm here – the O’Keeffe family and the people that work with us,” Bill outlined.

Herringbone vs. rotary vs. double-up parlour?

After returning home from New Zealand, Bill opted to build a 20-unit milking parlour in 2000, which is still tasked with milking the growing herd of British Friesian cows.

“I’d seen a good few parlours abroad, so they left the design to me; it’s still there and we’re happy with it,” Bill added.

With more land coming on board – that will join up to land purchased by Philip and Matt in 1979 – and a target of 380 cows in 2020 and 420 cows in 2021, an upgrade to the existing parlour has been discussed and all options have been explored. 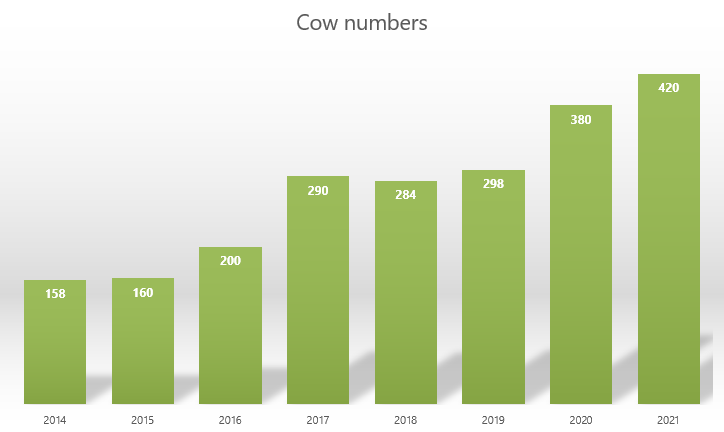 “The rotary has a very big price tag and some of the ground is leased, so we have to be careful. We looked at doubling up the existing one and keeping the investment level down.

“The rotary parlour comes with at least €500,000 of a price tag, which isn’t small money. We have developed a lot on the farm over the last four-to-five years. But, we are looking at it and considering it and we’ll see where ground is going over the next couple of years.

“We could probably milk 420 cows with a double-up parlour, but we will see. The good thing is here we are leasing ground in, but we are making investments in the home yard; we have done a lot with slurry storage and cubicles over the last four years, so there is a lot of money gone in.

“We are prepared to do it, but we wouldn’t be making the decision lightly and it would be as labour efficient as possible in terms of specifications.”

Some 400 cubicles are present on the farm – 130 indoors and 270 outdoors, with slatted housing rented for young stock bringing total slurry storage capacity for over 500LU.

The land is best described as dry and – in a normal year – there is a very short winter on the farm, with cows being turned out to pasture as they calve. 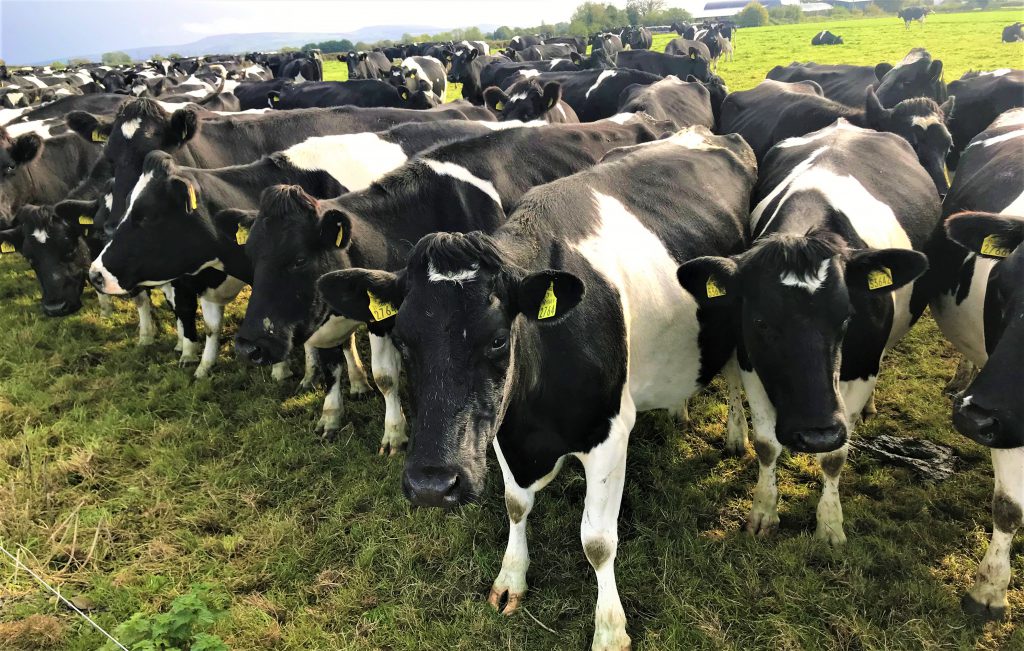 And, while outdoor cubicles have been criticised in the past as a feasible means of accommodation for dairy cows over the winter period, Bill outlined that this accommodation suits the system on the farm.

“We’re very happy with the cows transitioning from the outdoor cubicle to outdoor grazing. I went out in snow storms and the cows were lying down and they are relaxed and happy.

“If it rains heavy, they will often stand up and some of the feed passageways are inside, so they might stand in there for an hour.

“Our type of cow is a hardy cow; they have a good winter coat on them at that time of the year and they are well-fed and usually in good body condition, so there is no stress, no set back,” Bill added.

While a lot of hard work is put into the business over the course of a year, a good quality of life and family time is not forgotten about on the farm. All going to plan, the farm ‘closes down’ from December 20, with only mandatory jobs being carried out between this date and calving – which is due to commence on January 20, 2020.

In 2018, 530kg MS/cow was achieved on the farm. When it comes to breeding, the O’Keeffes breed from cows that have the ability to deliver good kilogrammes of milk solids.

At the moment Bill will calve down 200 cows in the first three weeks of calving – roughly 10 cows/day.

“If you calve a cow early, and you keep her milking, you will get good kilogrammes of solids. We don’t feed an awful amount of meal; we are prepared to go up to 1-1.2t. 2017 was a normal year – feeding a tonne of meal stocked at three cows/ha,” he explained. 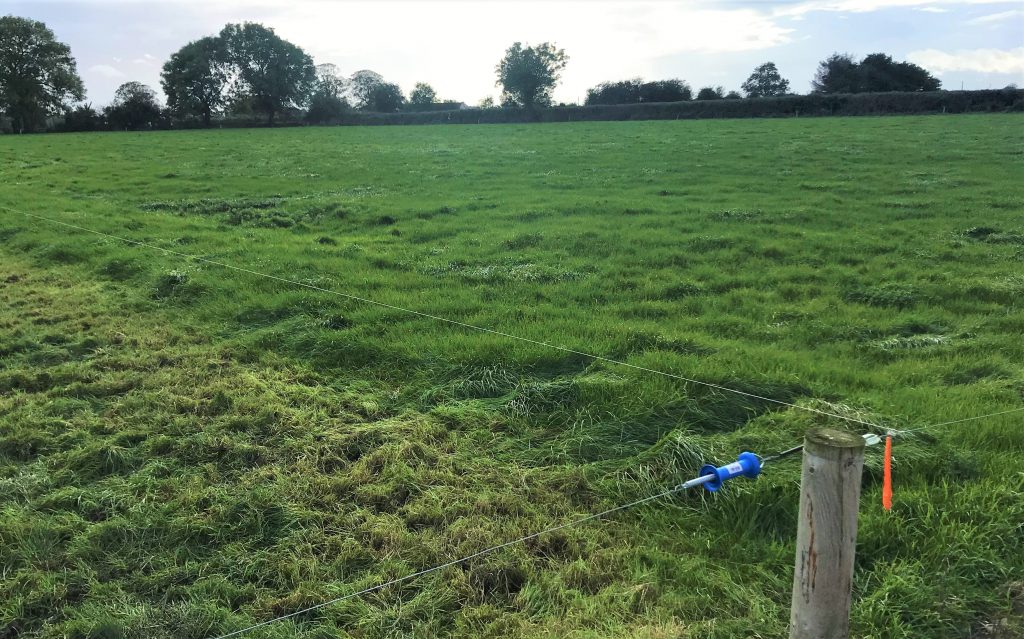 However, what underpins the performance of the herd is fertility, coupled with a long lactation. Last year, the average lactation length in the herd was 310 days, so cows are achieving very close to their full potential.

Having said that, while the cows are performing very well, the fact that the farm is excellently managed underpins the success of the herd. Bill noted that meal feeding will extend to 4kg to avoid the need to feed silage in October.

Looking at the grassland performance on the farm, two thirds of all the land farmed has an optimum soil pH, while almost 90% is at optimum levels for phosphorus (P) and just under three quarters of the land base is at the optimum level for potassium (K).

Some 15t DM (dry matter)/ha is expected to be grown on the farm in 2019 – up from 10t DM/ha grown in 2018, as a result of the severe drought which affected many parts of Ireland last year.

To overcome this, first-cut silage and either beet pulp or soya hulls (mixed 50:50 by weight) was fed. During July, August and September 400-500kg of silage was fed on the farm, along with hundreds of tonnes of beet pulp. 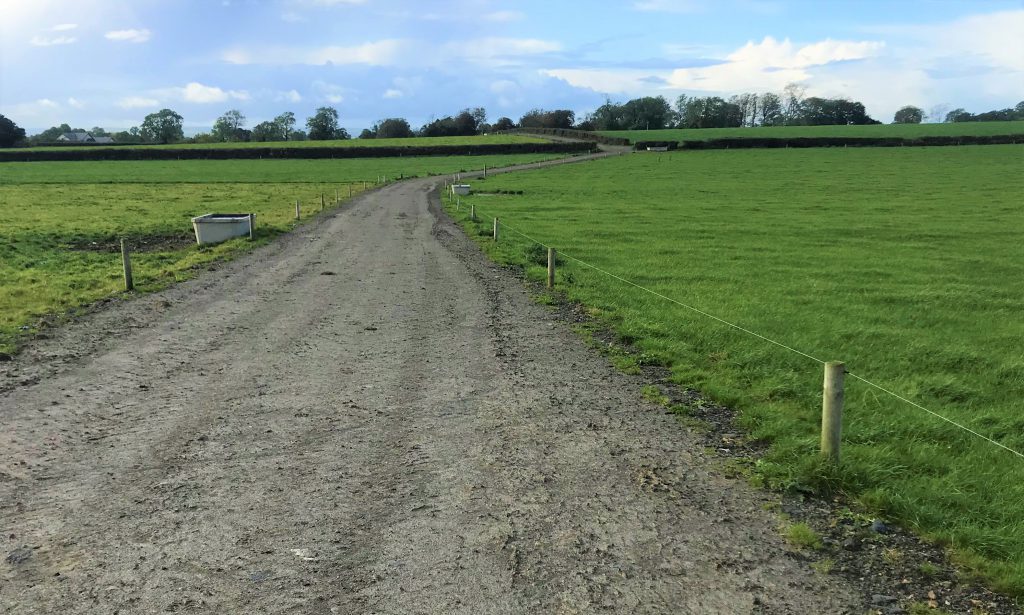 “We had to get feed and that was it. I had to send a haulier directly to the port to get two loads of beet pulp. We bought six weeks worth of beet pulp and when that was down we got another two loads. There is a big responsibility to keep animals fed.

The Irish Grassland Association Student Conference morning session took place at Cillín Hill, in Co. Kilkenny, which saw hundreds of students from various colleges around the country attend the event.

The session, which was chaired by IGA vice president Stan Lalor, was opened by Germinal Ireland’s Dr. Mary McEvoy who gave a detailed presentation on grass. 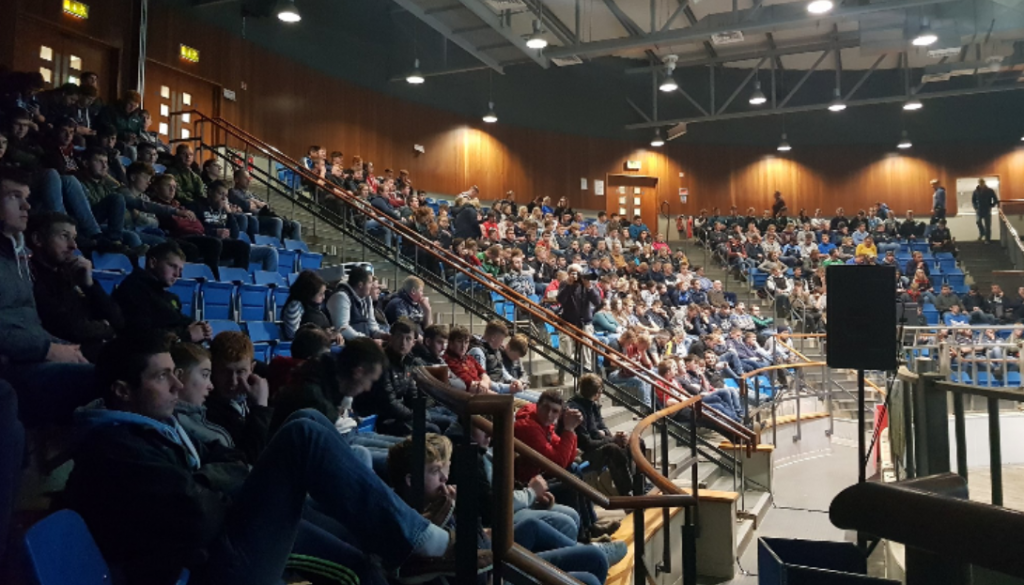 This was followed by Teagasc Green Acres Calf to Beef Programme manager Alan Dillon, who provided some timely advice to suckler and beef farmers in this time of increased downward price pressure; he also provided an update on the Green Acres programme.

ICBF’s Pat Donnellan answered the frequently asked question: Why does a bull’s star rating change on the €uro-Star evaluation system? This was followed up by Teagasc’s Christy Watson who provided a case study on the difference in the progeny between 4/5-star and 1/2-star animals. 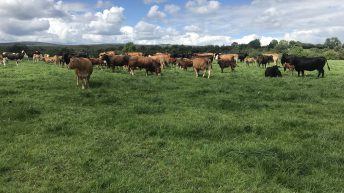