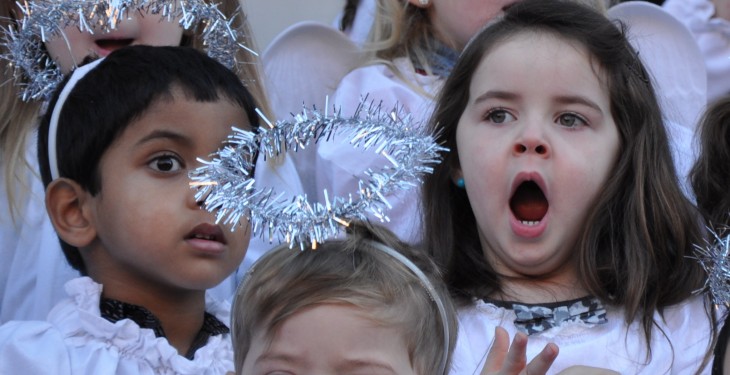 The Irish Farmers Assocaition (IFA) Live Animal Crib has been officially opened by Dublin’s Lord Mayor Oisin Quinn and the IFA President John Bryan at the Mansion House in Dawson Street this morning.

The ‘Little Angels’ from St Josephs Nursery, Morning Star Road, Dublin 8 and the Lucan Gospel Choir were present at the traditional opening of Dublin City’s only Live Animal Crib and  entertained everybody with their angelic singing of festive carols and gospel renditions.

The Lord Mayor Oisin Quinn said: “I am proud to open this year’s IFA Live Animal Crib and be part of a Dublin tradition which spans nearly 20 years.  The crib represents a small piece of the countryside with the live animals nestled in a comfortable and safe life-size stable.  It is a great opportunity for families to come into Dublin City and enjoy this simple traditional nativity scene.  I would like to thank the Irish Farmers’ Association and Dublin City Council for their generous gift to this city.”

IFA President John Bryan said: “The Live Animal Crib at the Mansion House in Dublin has an enduring appeal for families visiting our capital city and is very much a central element of the Christmas experience. Next year marks the 20th anniversary of this traditional nativity scene that farmers have gifted to the people of Dublin as a symbol of our largest indigenous industry. It also raises funds for some very worthy charities and I look forward to large numbers, young and old, taking some time to enjoy the IFA Live Animal Crib between now and Christmas Eve.”

The IFA Live Animal Crib has been a joint venture between Dublin City Council and the Irish Farmers’ Association since 1995.  The crib is a specially constructed, life-size stable containing sheep, donkeys and goats.  The animals are brought in each morning and returned to a farm on the outskirts of the city each evening.

The crib is open to the public until Christmas Eve from 11am to 6pm daily (Christmas Eve 11am to 2pm).  Admission is free, but any voluntary contributions from the public will go towards the Mansion House Fuel Fund, of which the Dublin Simon Community and the Vincent De Paul are the two main beneficiaries.