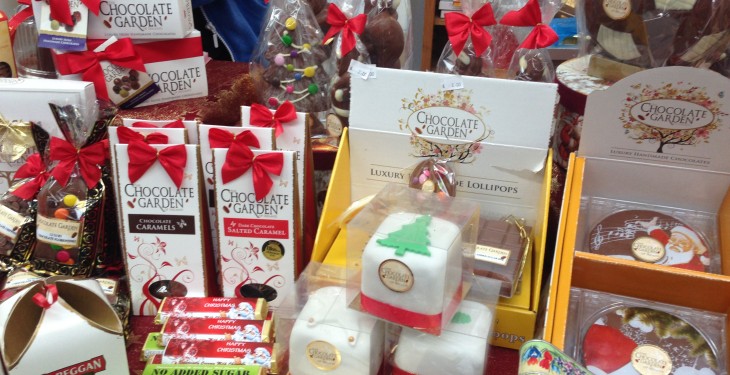 The Dublin Docklands Market was also in full swing alongside the CHQ, which added to the already jovial festive atmosphere.

With mulled wine, mince pies, Irish farmhouse cheese and smoked salmon on offer the scents of Christmas wafted through the statuesque building. Shoppers and festive enthusiasts were treated to samples of the finest Irish produce with high-profile companies such as Keoghs Crisps, Ballymaloe Relish and Cooleeney Farm in attendance.

According to exhibitors, footfall was steady with the wicked weather on Saturday driving many shoppers into the CHQ for shelter, a hot drink and a browse. Once stomachs had been filled many used the opportunity to purchase gifts for the foodie lovers in their lives.

‘Cookie Cate’ owner of the ‘Cookie Jar’ has brought a unique gift idea from the US to Irish shores where instead of bottles of wine and flowers guests bring boxes of tasty sweet treats. Cate sells beautifully presented boxes filled with chocolate chip cookies, raspberry streusel and brownies from €20.

Cooleeney Farm has been producing cheese for 26 years and developed a strong niche market for company in that time. Michael Gaynor of Cooleeney commented that the event had been a great success.

“Any event where you can meet face-to-face with consumers is great, at the end of the day Ireland has some of the best land and that leads to happy cows and good-quality dairy products”. Cooleeney use the milk from its carefully-reared Friesian herd to produce its award-winning cheese that has become a favourite for gourmet chefs and cheese lovers alike.

Bord Bia has been gearing up for a manic Christmas for many of its associates. It has recently released some interesting figures on Irish eating habits over the festive period.  Bord Bia estimates Irish consumers will eat approximately 800,000 turkeys this Christmas. According to the most recent Bord Bia Quality Mark Christmas Research, traditional turkey and ham is still the No 1 choice with 84 per cent of Irish people eating it on Christmas day.

While 11 per cent of Irish people chose other Christmas meats such as beef, lamb, duck, goose, pheasant and venison – turkey, ham and stuffing have emerged as Ireland’s favourite Christmas foods. Regionally,

Pictured some sweet treats at the Bord Bia Christmas market