How one farmer has his calves registered before the kettle boils

Denis Burke is a dairy farmer in Kilmaine on the Mayo side of the Mayo/Galway border and this will be his second spring using the Herdwatch app.

He milks 130 spring-calving Friesian cows and he would readily admit he is not the best when it comes to technology.

However, Denis is now coming into his second calving season using the Herdwatch Farming app, and it appears there is no going back to the old ways after making the decision to use the award-winning app developed by FRS Farm Relief Services.

In 2015, Denis registered over 100 calves using Herdwatch, which has saved him an estimated 16 hours or roughly 10 minutes per calf.

Denis registers the calves as they are born using Herdwatch.

“Before Herdwatch I would let calf registrations pile up and as a result some calves could go over the 27-day limit which was a real problem,” he said.

With Herdwatch, this is no longer a problem because he registers the calves as they are being tagged.

The calves are registered before the kettle is boiled.

Another added benefit is that mistakes are harder to make, as the calf and dam are right there in front of you.

Like most dairy farmers, Denis sells a lot of calves in spring and this can be a time-consuming process. Denis now uses the app to apply for his movement certs.

“I can apply for the certs as I sell the calves and I get them immediately, so it’s very handy,” he said. 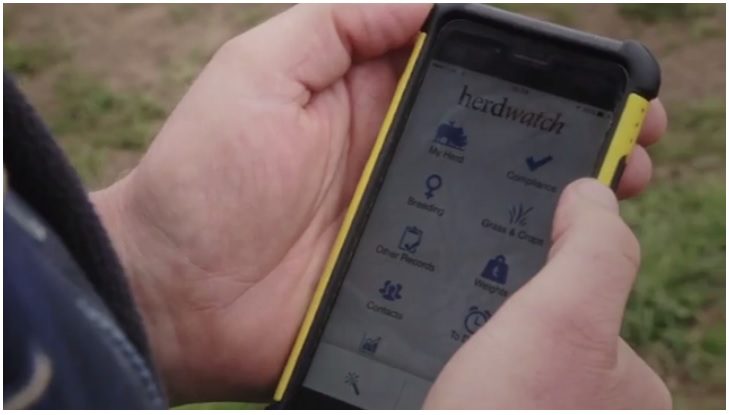 Easy to use on phone, tablet and computer

Denis uses the app both on his iPhone and iPad, which means “no more time is wasted in front of a computer.”

The app is extremely easy to use and can be accessed from multiple devices at no extra cost. It is available on Android and Apple devices, and on laptops and PCs.

Bord Bia Records in your pocket

Recording remedies and feed purchases through Herdwatch makes it much easier to keep up-to-date with the Bord Bia requirements.

For example, you can simply record your treatments as your cattle are in the crush. It’s only a matter of printing the reports when you do get an audit, which are fully compliant with Bord Bia.

It makes sense to use

Denis is one of over 5,000 farmers using Herdwatch to save hours every week on farm paperwork, for just €2.50 a week.

Herdwatch is fully approved by the Department of Agriculture, ICBF and compliant with Bord Bia.

A free trial of the Herdwatch App is currently available Here