The flexibility of a once-a-day calf feeding system has allowed a Clare-based agricultural contracting business to expand into calf rearing, increasing numbers year-on-year to 250.

Increasing livestock numbers seemed unfeasible because of the constraints on Nigel’s time during busier periods of the year.

Making it possible with Shine Once-a-Day

However, Shine Once-a-Day calf milk replacer made that option possible.

Nigel admitted he was initially sceptical because he had previously experienced disappointing results with other milk replacers but decided to rear 30 calves as a trial in the first year.

The results were excellent and differed completely from what they had anticipated. 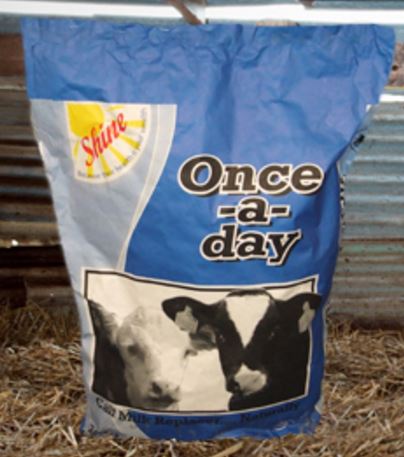 Calves were content within 36 hours of starting on the system and their subsequent performance, especially at weaning, was impressive. There were no mortalities or nutritional upsets.

“Every evening, instead of calves being anxious for milk, they were playing around in the pen and could not be more content,” Nigel said.

The amount of good quality starter ration the calves consumed was remarkable.

Growth of the business

Buoyed by the success of that first year, Nigel increased the number of calves reared to 250 in 2016. The calves are mainly Friesian bulls but with some Aberdeen Angus and Hereford bulls too.

He now has an excellent reputation for delivering very healthy and thrifty calves, so much so that many of their clients are repeat buyers.

Nigel and Vanessa said the advice they have been given by Paul Conroy, of Conroy Agri Supplies, has been invaluable – providing them with a clear and simple feed plan to help guarantee success.

Paul explained how the unique balance of six fats, including butterfat and linseed oil, complemented the low-heat dried skimmed milk, cultured buttermilk and sweet whey to give a very palatable and easy mixing unique product.

Paul stressed from the start that it is imperative that every calf gets their allocated milk feed at the same time daily and that the system only works with calves that have access to clean fresh ration, water and clean fresh straw in a rack daily – from the day of arrival.

With dairy farmers keen for Nigel and Vanessa to collect calves at a younger age, on the recommendation of Paul, calves are fed Transformula in the first three days after they arrive on the farm.

Transformula is formulated by Bonanza Calf Nutrition to feed stressed calves or to replace natural cow transition milk, which is a necessity on dairy farms where Johne’s disease is present.