Blowfly is the main external parasite traditionally affecting sheep in the summer months and over 90% of farmers have been caught out by blowfly strike in the past¹.

Changing weather patterns, however, mean that it is now not uncommon to hear of cases as early as April and as late as October and 63% of farmers agree that the blowfly season is lasting longer¹.

Blowfly strike occurs quickly in warm and humid weather and, if left untreated, it can have devastating effects. Worryingly, more than one in five farmers have suffered financial losses greater than €588¹ as a result of blowfly strike.

However, it is preventable. Taking proactive steps can offer protection, peace of mind and are always better than cure.

Prevention is even more important to protect the welfare and productivity of the flock so don’t be tempted to ‘wait and see’.

What are the financial implications?

Blowfly strike is not only a major welfare issue that farmers hate to see on their farms, but the financial implications associated with blowfly strike can be very costly.

2015 data² suggests the cost implications are:

The symptoms of blowfly strike range from agitation – foot stamping, vigorous shaking, gnawing or rubbing of the tail and breech – to dejection and ultimately death.

However, by the time strike becomes visible a considerable amount of damage will already have occurred and farmers spend a lot of time checking for and worrying about blowfly strike.

In warm, wet weather significant damage can occur in as little as 36 hours after egg laying. The areas most prone to damage are the withers, flanks and the tail area – especially after scour. Open wounds are also particularly vulnerable.

There are two main types of chemical blowfly strike control. These are insect growth regulators (IGRs) and insecticides.

IGRs, such as CLiK EXTRA, CLiK and CLiKZiN, stop first-stage larvae from developing into the destructive second-stage larvae and so prevent the disease by breaking the blowfly life cycle.

Specific to the blowfly parasite, they are termed ‘narrow-spectrum’ products. Best practice guidelines state that narrow-spectrum products should be used where possible to prevent chemical resistance from developing.

Insecticides (i.e. synthetic pyrethroid (SP) pour-on products such as Young’s Vector or organophosphate dips) are classified as ‘broad-spectrum’ products as the active ingredients can be used to control many different parasites. This may lead to potential overuse.

Factors to consider when selecting a product

The length of protection a product offers is a top priority for farmers. A long period of cover is more cost-effective in the long run and will mean that farmers don’t need to keep re-gathering sheep to re-treat them. This will save them effort, time and money.

CLiK EXTRA offers the longest period of protection available on the market at 19 weeks, followed by CLiK at 16 weeks.

Using these products will allow lambs to be treated early with blowfly protection that is likely to last through to drafting for sale.

Treatment applied to ewes after shearing will also mean that if the blowfly season is extended, due to the summer and autumn weather, the ewes will still have protection. 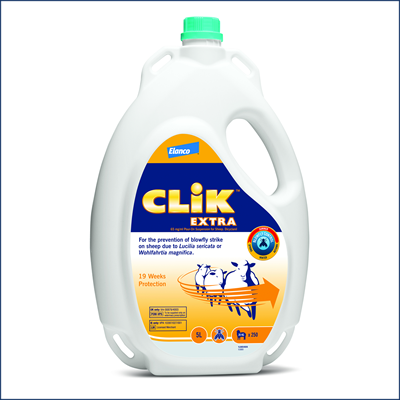 The withhold period is also important as it affects a farmer’s ability to send lambs to market when they are ready. In this case, CLiKZiN offers eight weeks IGR protection with a short withdrawal period of just seven days.

Many products only protect the site where they are applied which can be disastrous in terms of blowfly control.

However, CLiK EXTRA, CLiK and CLiKZiN all incorporate FleeceBind technology which enables them to spread and bind throughout the fleece, providing full-fleece protection* and offering farmers peace of mind.

Resistance is also an issue of growing importance and whilst it is tempting to use a product that treats a broad range of parasites, this could lead to its overuse and the build up of resistance.

Instead, farmers should use a narrow-spectrum product such as IGR dicyclanil in CLiK EXTRA, CLiK and CLiKZiN. These products are targeted at the parasite they need to control – in this case the blowfly larvae.

Prevention is the best form of control for flock health, finances and peace of mind.

One treatment with CLiK EXTRA, applied early, will give 19 weeks cover and take lambs right through to finishing. Therefore, there is no need to worry about strike or re-treating.

If strike does occur, farmers must be quick to act with an SP pour-on such as Cypermethrin (Vector) or an OP dip to minimise distress, prevent production losses and even the death of affected animals.

On-going strike prevention, using an IGR, for the rest of the flock should also be recommended if they have not already been struck.

To make the most of their medicines and money – and ensure length of cover is achieved – farmers are advised to always use the correct applicator and follow application instructions to the letter.

Has there been a blowfly outbreak in your area?

AgriLand and Elanco are running a blowfly outbreak monitoring campaign across Ireland. Check out the interactive map below to see if your region has been affected.

Submit a report if you’ve been affected to be in with a chance to win a brand new iPad. Launch the Blowfly monitoring map

Is there a blowfly outbreak in your area?

How to control and treat flystrike on your farm?