Better land mobility could push productivity rates and allow the North’s agricultural sector to grow, it has been claimed.

The Irish conacre system has damaged much of the island’s land – renters are less likely to want to invest in reseeding and fencing if they have no guarantee the land will be theirs to use next year.

Speaking at a press briefing, John McCallister, the man heading up the new Northern Ireland Land Mobility Scheme, said: “[Research by YFCU and the UFU] identified that 48% of farmers over 50 had no successor. The average age of a farmer in Northern Ireland is 58 years of age; which means we must have a significant number in their 60s and 70s to push it up so high.

We were also involved in the land-use report; only 18% of our land is in its optimum fertility. Those stats alone say we have a structural problem and we are also not maximising our land use.

The new Land Mobility Scheme has been developed by YFCU (Young Farmers Clubs of Ulster) and the UFU (Ulster Farmers’ Union) to encourage older farmers to make farm succession plans; examples include leasing the farm or share-farming.

McCallister added: “We need to look at how we will get a more collaborative approach to farming, how we improve our succession planning and how we get people talking about it.

“Collaborative farming will maximise our land use and our productivity. We do have a productivity issue in Northern Ireland – it’s a problem right across the economy, but also in the agri-food sector.

If 18% of your land isn’t in its optimum fertility, you’re going to have a productivity problem.

The theory behind the boost to productivity is that farmers who have longer term leases or a guarantee that they will be working on the same farm for several years are more likely to make investments. In comparison, those on the conacre system are hesitant to invest in case the land is not theirs to use next year.

McCallister said he believed investment in the region’s ground would allow better investment in land not at its optimum fertility.

The agreements available under the scheme include a mixture of long-term leasing, farm-to-farm contract rearing/production, share-farming, and traditional family partnerships.

In Northern Ireland, we have a third of our land set in conacre – that’s not a particularly healthy thing to do particularly as you approach November 1 – you could potentially see that moving.

McCallister added: “So why would you invest in land that you’ve no security of tenure? For forward planning, if you are milking even a relatively large herd and suddenly you lose a block of 50ac or 60ac that causes serious problems.

“Why would I invest in that land – why would I reseed it, fence it, lime it, clean out sheuchs – all of those things. Conacre, I don’t think, has been a particularly good thing.

“We don’t have the tax incentives that the South have, I accept that. But if that land is put in a long-term lease or worked through share-farming you have the advantage that the land is going to be managed properly and as long as that land is agriculturally managed he keeps his inheritance tax relief – and that’s a huge bonus.

“Most of these guys have maybe built up a herd as well and want to keep a farm in good working order so that’s the incentive to do it.

“That £200 an acre [comparison with conacre] can be penny-wise and pound foolish in the sense that you end up five years later with the ground in terrible condition and you need to spend a huge amount fixing it.” 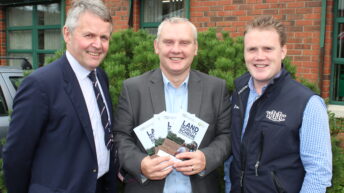