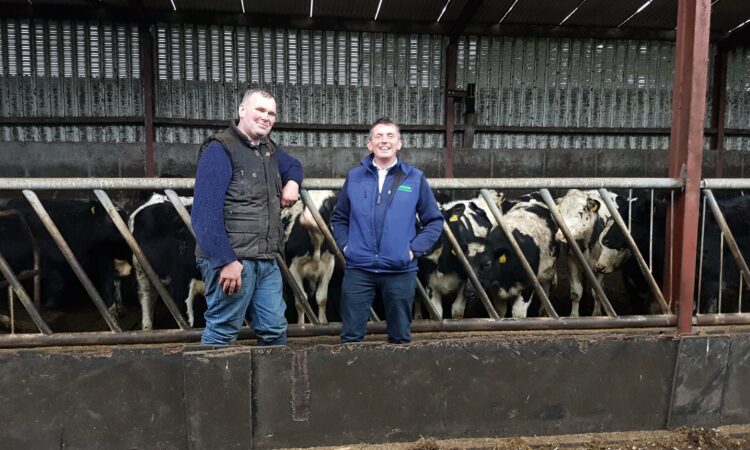 Owen O’Sullivan with John Lynch of Kellihers of Tralee

A dairy farm is reporting calf rearing cost savings of more than 60% since introducing a once-a-day milk feeding routine.

But the benefits have been multiple; they have discovered cost savings and healthier calves that have no performance setback at weaning.

The O’Sullivans milk 96 cows and they retain all calves up to the age of 12 months.

They had been feeding calves cow’s milk twice a day after having poor success with mixing a high protein milk powder but it was a time-consuming job.

Their sheds aren’t built specifically for calves and, with so many milk replacers on the market, they were at a loss to know which to trial.

Their confidence was bolstered when they attended an information evening hosted by Bonanza Calf Nutrition in conjunction with Kellihers Feed and Agri Supplies Ltd at Tralee.

‘It couldn’t be simpler’

With advice from Dr. Christine Cummins of Bonanza, the O’Sullivans embarked on a plan to maximise the use of their sheds and to feed Shine Once-a-day replacer mixed into cow’s milk.

Newborn calves are fed 3L of colostrum as soon as possible after birth and housed in individual pens where they are introduced to transition milk.

They are then grouped in pens of five as more cows calve and, at an average of 10 days old, they are moved into the shed in groups of 10.

At this stage they are given access to concentrates and straw to eat as well as ad-lib fresh water. At this point, they are introduced to Shine Once-a-day, the morning after their final evening feed, with 600g mixed into 10L of milk for every three calves.

“It couldn’t be simpler,’’ said Owen. “It is so convenient, I can get up in the morning and focus on attending the newborns and milking my cows. When this is done I can feed my calves their Shine Once-a-day without a bit of stress on them.’’

Not only has this eased the workload, he said, but the amount of time saved is phenomenal. The evening routine had previously taken until 9:00pm but the O’Sullivans now finish the work at 7:30pm.

An added bonus is that calves are healthier and more content. “There is no noise and no sickness,’’ said Owen.

Calves eat approximately 1.25kg of meal at weaning, which is a very gradual process starting at about 42 days and completed by 60 days. Volume of Shine Once-a-day is decreased without adjusting concentration.

After weaning, calves are turned out to graze grass as soon as the weather permits; they are given access to concentrates at grass, which helps with the transition.

All calves perform very well with no setbacks, said Owen. “They are extremely even when reared on this system,” he said. “We have no small or ‘poor’ group.’’

The new system has resulted in less whole milk being fed.

“With the milk price he was receiving compared to the cost of Shine Once-a-day, Owen and Eileen are reducing their overall calf rearing cost by more than 60%,’’ said Dr. Cummins.

“For them this system is proof that it’s not always true that saving time and money is cutting corners to make losses elsewhere. In this case it costs less money, takes less time, and calf performance is better so it is a win-win situation.’’