Met Eireann have upgraded a storm due to hit the west coast this evening and through the night to Status Red.

The weather is set to become increasingly unsettled nationwide in the coming hours as both high winds and heavy rain batter the country.

It says rain will continue to move eastwards across the country with sleet or snow in places for a short time.

Temperatures will gradually rise to between 7 and 11 degrees Celsius this evening with wet and windy weather countrywide and a risk of local flooding.

It will become very windy with strong to gale force southerly winds developing.

According to Met Eireann rainfall totals of 25-35mm are expected. 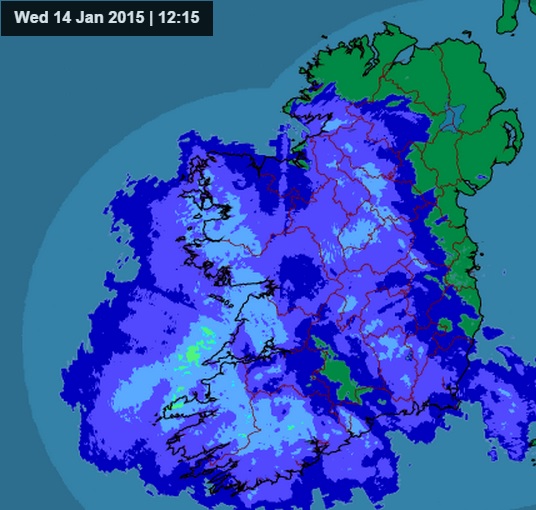 The heavy rain will clear early tonight but showers will follow overnight in the north and west, some wintry.

According to forecasts strong to gale force winds, with storm gusts are likely in places.

Tomorrow morning will be stormy with a risk of damaging gusts. The winds will gradually ease down during the afternoon and evening.

There will be heavy and prolonged showers also (sleety over high ground).

It will feel cold with highest temperatures 4 to 8 degrees Celsius.

Cold weather to persist into next week

According to Met Eireann, the generally cold conditions seem set to persist well into next week, with further threats of snowfall from time to time.

Met Eireann says on Thursday night, wintry showers will become confined to northern and western counties while the rest of the country becomes mainly dry and clear.

Friday and Saturday will remain rather cold with fresh and gusty, west to northwest winds. It will be showery in general but the bulk of the showers, many wintry, will affect northern and western counties; elsewhere will have only isolated showers and clearer skies, by and large.

Met Eireann says despite persistently breezy conditions, sharp frosts will occur at night and surface icing is likely to be a problem.