On a pro forma basis, revenue increased by 8.1% in the quarter.

The group has revealed performance results for both its UK & Ireland, and its US convenience foods businesses.

Growth in Food to Go was primarily driven by an increased revenue contribution from the distribution of third-party products through the group’s Direct to Store network.

There was some modest improvement in the rate of underlying category growth, compared to Q2 levels, according to Greencore.

Reported revenue in the other parts of the Convenience Foods UK & Ireland division decreased by 12.8% in Q3, reflecting the elimination of cakes and desserts revenue. On a pro forma basis, revenue increased by 2.5%.

The phased closure of the desserts manufacturing facility in Evercreech was completed in June and the site was subsequently divested.

The proposal requires employee consultation and, if agreed, the proposed closure of the ready meal unit will occur in March 2019, incurring modest cash costs.

The strong pro forma revenue growth in the quarter was driven by the former Peacock Foods business where pro forma growth accelerated to 19.4%, with a broadly similar level of volume growth.

Pro forma revenue in the original part of the US business decreased by 25.2% due to previously announced volume declines.

As anticipated, the scale of capital investment spending across the group normalised in Q3.

Greencore anticipates cash generation and returns to continue to improve through the second half of the 2018 financial year and beyond.

The group continues to progress its refined US strategy to focus on the large and structurally growing branded food partner channel.

The year saw the recent appointment of Anton Vincent who joined the group as the CEO of Greencore USA in July.

Vincent has more than 20 years’ experience as a senior executive at General Mills, most recently as president of the Snacks Division.

In the UK, Peter Haden, currently group COO, has been appointed to the newly-created role of CEO of Greencore UK, effective as of October 2018.

The group anticipates good pro forma revenue growth in the final quarter of the financial year.

The group will report its FY18 results on December 4. 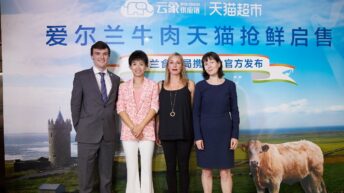