Irish farmers continue to wait on a concrete price for harvest 2020 grain. Apart from where grain was sold forward during the year, many farmers are now being paid on account with the balance to come later in the season.

Chicago Board of Trade (CBOT) wheat and maize prices also increased. The US released maize inventory figures on Wednesday (September 30) and stocks were unexpectedly low.

The United States Department of Agriculture (USDA) placed September 1 maize stocks at 50.67 million tonnes. This is 11% below pre-report estimates. It is the smallest inventory for September 1 in four years.

This week the Agriculture and Horticulture Development Board (AHDB) gave a run down on where stocks stand around the world at the minute.

Australia is out of a long-term drought and wheat yields are expected to increase significantly in the country. The International Grains Council (IGC) has forecast a 15 million tonne rise in global ending stocks to 294 million tonnes.

Looking at maize and the global production estimate is 1,160 million tonnes. That’s 39 million tonnes higher than last season according to figures from the IGC.

The IGC reduced its maize estimates by six million tonnes since August, as production is expected to be lower in China, the EU and the US than forecast earlier in the season.

On the continent this week feed barley (delivered Rouen) was trading at €173/t on Friday morning (October 2). On the same morning Free-On-Board (FOB) Creil was trading at a spot price of €181/t.

Some prices from the the main markets are outlined below. 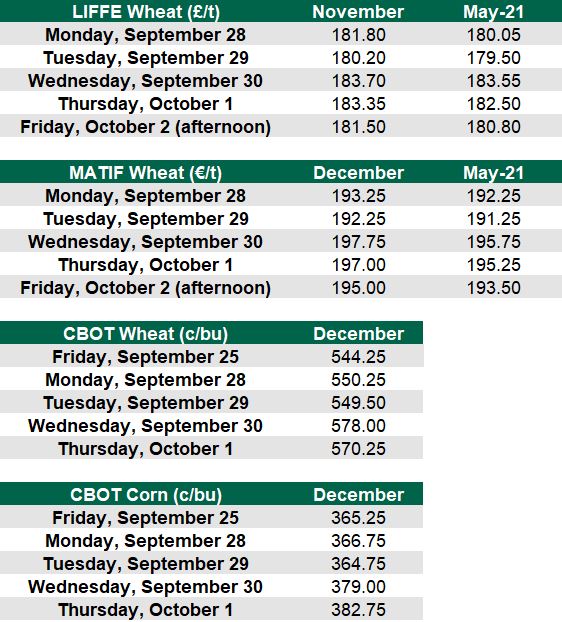