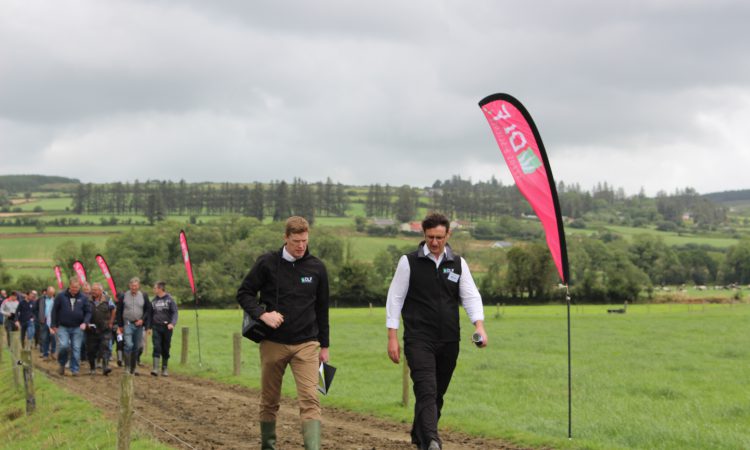 Key topics covered at the event were: soil nutrition, with an emphasis on potassium (K), phosphorous (P) and lime; grassland management; residuals; regrowth and covers; and finally grass varieties.

Michael is one of four farmers within the DLF Grass Partner Program aimed at improving grassland utilisation with specific concentration on ryegrass varietal performance.

Michael has been using DLF varieties since 2016 and, after joining the DLF Grass Partner Program in 2018, has begun sowing individual varieties of perennial ryegrass and feeding the performance data back into the partner program.

Earlier this year, DLF announced the introduction of the Grasstec Group to the partner program as the official independent ‘analysis partner’.

Grasstec’s grass-measuring team has been visiting DLF’s partner farms on a regular basis to measure and record grassland, with a particular emphasis on capturing data around the progression of DLF’s latest varieties.

Noel Gowan, who spoke on the day, said: “There are four rules of grassland management: that pertaining to residuals; rotation length; protecting regrowth; and pre-grazing covers.”

Speaking at the event, DLF general manager Paul Flanagan said: “What is happening on Michaels farm and the other three partner farms is essentially an extension to our research program.

“This year, Michael is grazing a new DLF variety called Nashota which is not yet on the Irish recommended list or PPI. On paper from our Waterford trials and early department results, Nashota has the potential to be a market leader in Ireland.

“Here in Kerry, Michael and 110 black and white ladies will determine its grazing potential.

“What we have seen so far from the work carried out on the partner farms very much mirrors the results from grazing studies published by Moorepark earlier this year, where DLF varieties like Nifty, Aspect, Solas and Xenon have performed very well under actual grazing trials.”

Speaking at the event, graze out and utilisation were essentially a theme.

In his introduction, Michael O Sullivan stated: “We joined the Grass Partner Program with DLF in 2018 because we wanted to get more from our farm and had confidence DLF could help us bring our goals to fruition.”

DLF has invested like no other in research since getting involved in the Irish market in 2015, having screened over 6,000 varieties to date for application in Ireland.

“Nashota comes from our first round of trials in Ireland, meaning we may have a winning variety with our first attempt from Irish trials. More interesting is, since then, we have been selecting the parent lines in Ireland and crossing specifically for the Irish market,” added DLF Paul Flanagan.

This autumn, we will sow varieties bred specifically for Ireland in Waterford trials. If our first attempt with Nashota has a chance of adding value to farmers like Michael here today, our Irish breeding efforts will ensure we continue to add value to Irish farmers for years to come.

Launched in 2017, the “More Milk with DLF” Grass Partner Program is a long-term project that will aid the grassland utilisation for the four farmers involved.

Here in Kerry, Denis Brasil of Teagasc, Adam Heffernan of KFA and Noel Gowan have all played their part in working to make this happen for farmers across the island of Ireland.