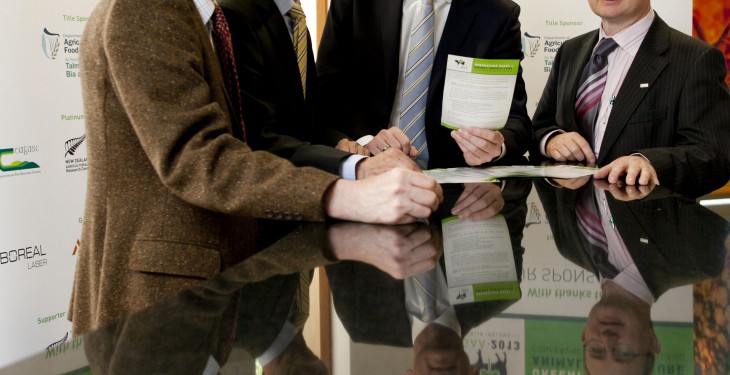 UPDATE: Speaking at the opening of a prestigious international Greenhouse Gases and Animal Agriculture Conference at University College Dublin this morning, the new Minister of State at the Department of Agriculture, Food and the Martine, Tom Hayes TD emphasised the importance of a strong, sustainable Irish agriculture sector.

“Ireland continues to build on the strengths of its green image and is deeply committed to maintain sound agricultural practices. Our aim is to maximise the food production strengths that are intrinsic to the Irish agri-food sector, particularly our environmentally friendly grass-based production system”.

The world population is set to increase to nine billion by 2050. It is also projected that the increasing population, along with a growing middle class in large countries such as China and India, will lead to a 50 per cent increase in demand for food production by 2030. It is vital that countries with efficient systems of agricultural food production such as Ireland are able to increase their production in the most sustainable manner so as to meet this critical food security challenge.

The Joint Research Centre of the European Commission has found that Ireland’s dairy industry has the lowest carbon footprint in Europe, while our beef production is also one of the most carbon-efficient.

Since 2011, the rollout of Bord Bia’s Origin Green carbon footprint monitoring for all of its quality-assured beef farms, has further enhanced Ireland’s beef production carbon efficiency profile at international level.

Concluding, Minister Hayes said: “Balancing the demands of producing more food to attain global food security for an ever increasing population while, at the same time combating climate change, is one of the most important challenges facing governments, industry and policy makers alike.”

The international Greenhouse Gases and Animal Agriculture Conference is being hosted this year by Teagasc, and involves participation by scientific speakers and delegates from throughout the globe and builds on previous successful meetings in the series. The conference, which runs until the 26 June, will focus on advancements in the areas of animal derived greenhouse gas mitigation since the last meeting in Banff, Canada, in 2010.

Speaking at the Conference, Dr Frank O’Mara, director of research at Teagasc, said agriculture globally has an emissions challenge. “Improved efficiency can do a lot to reduce GHG emissions footprint, but there is also an urgent need to find breakthrough mitigation and adaption solutions,” he said.

“Ireland has environmentally friendly grass-based feed production systems of dairy and beef production, which provides Ireland with a significant competitive advantage. It allows high-quality food production with some of the lowest food carbon intensities at EU and global level, on a per unit produced basis.  Sustainability is central to Ireland’s agricultural expansion plans as outlined in the Food Harvest 2020 report. It aims to achieve sustainable growth, through increased efficiency, achieving higher productivity and greater competitiveness in primary agriculture.”

Teagasc recently produced a ‘Marginal Abatement Cost Curve’ for GHG emissions in Ireland, which demonstrates the potential impact of measures such as management, improved genetics and more efficient use of resources.

“Teagasc has also developed a knowledge transfer tool called the ‘Carbon Navigator’ that can be used to give guidance to farmers on measures they can adopt to reduce their GHG emissions and improve profitability ,” said Dr O’Mara.  A special edition of the TResearch has been produced by Teagasc on the GGAA Conference, it’s a scientific magazine and it’s available on www.teagasc.ie

Pictured at the launch (from left): Alexander Evans, Head of School, Dean of Agricultural Scciences, UCD; Dr Shane Colgan, EPA; Simon Coveney TD, Minister for Agriculture; and Frank O’Mara, Teagasc ; at the announcement of the GGAA 2013 that takes place in UCD  from 23-26th of June 2013 Photo: Johnny Bambury