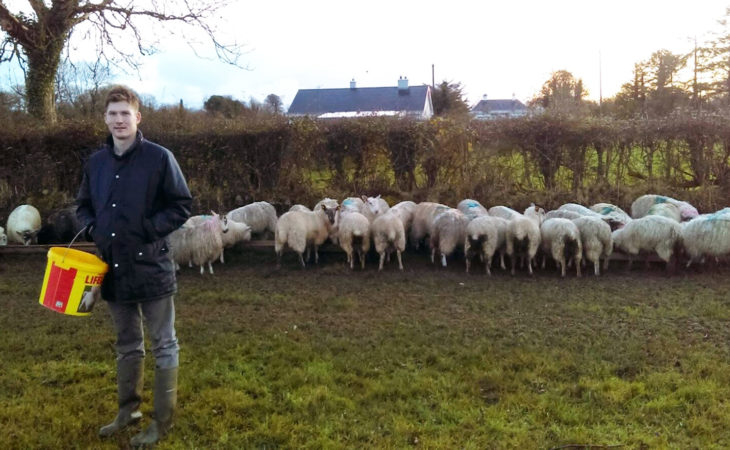 The story of how a 28-year-old Co. Galway sheep farmer went through a farm transfer process with his parents and brother is an inspiring one for other young Irish farmers.

This is the opinion of Dr. Shane Conway, a post-doctoral researcher at the National Rural Network / NUI Galway.

“Supporting young farmers wishing to enter the agricultural sector, or improve their farm holdings, is a key priority of Ireland’s Rural Development Programme (RDP) 2014-2020,” he said.

“Throughout the EU, such measures aimed at stimulating generational renewal in agriculture are increasingly viewed as crucial to the survival, continuity and future prosperity of the agri-food industry, traditional family farm model and broader sustainability of rural society.”

The National Rural Network (NRN) is a component of the RDP – led by Irish Rural Link in partnership with The Wheel, Philip Farrelly & Co and NUI Galway.

Dr. Maura Farrell and Dr. Conway, based in the discipline of geography’s rural research cluster at NUI Galway, are leading researchers in the NRN consortium.

“One of the key objectives of the National Rural Network is to promote innovative initiatives that can help people in the farming community and in rural areas to maximise the success of the objectives set out in the Rural Development Programme,” Dr Conway said.

A recent young trained farmer case study carried out by the NRN with Leo Morrissey, from Garrafine, Ballymacward, Ballinasloe, is seen as a key example of how the network communicates important opportunities and outputs in the RDP to stakeholders.

In Leo’s case, he went through a successful farm transfer process with his parents and brother, John, after doing his Green Cert at Mountbellew Agricultural College.

“His progression in farming over the past three years is an inspiring story, and one that can assist and encourage other young Irish farmers to actively engage with, and avail of, the various schemes and supports available to them under the current Rural Development Programme,” Dr. Conway said.

Leo also commented, saying: “In January 2015, my parents, brother and I sat down around the kitchen table to discuss the future of the family farm.

“The first sentence that came out of my mouth that summed up my feelings on the matter to my family was: ‘When I am looking to retire or pass on my assets in time, I will do whatever I want with them. So if you two want to sell up and do as you please, that is fully up to yourselves and I don’t mind.’

“Of course, I knew this would never happen, but I just wanted it made clear that I had no sense of entitlement, and this I felt made the entire process easier.

The division of the farm was arranged to what was felt was the best going forward, following open and honest communication between all family members.

Leo’s brother, John, had already completed his Green Cert. “I was in the process of doing my Level 5 and 6 Certificate in Agriculture part-time. The announcement of the National Reserve was also a big help when doing the maths on the process and luckily both John and I qualified for it,” said Leo.

The brothers decided against availing of the Collaborative Farming Grant Scheme, Measure 16 of the Rural Development Programme, to become a registered farm partnership.

This was mainly due to the age profile of their parents at the time and also because the farm’s finances were healthy from the outset, facilitating separate farm entities.

The Collaborative Farming Grant Scheme was introduced to encourage farmers who are establishing farm partnerships to adopt best practice by engaging the help of experts when drawing up the farm partnership agreement, Dr. Conway said.

Leo said: “The exceptional foundation laid down by my parents assisted John and I greatly in establishing our own independent farm enterprises. This provided us with an additional injection of enthusiasm.

“I think the collaborative farming grant is a good option for the larger-scale farmers or farmers who are still relatively young and may have a successor eager to get involved in the family farm business.

“It may also be a necessity in some cases, especially if the older generation are still financially dependent on the farm.”

Other benefits of forming a registered farm partnership, Leo said, include preferential stock relief as well as ensuring that the members of all registered partnerships are fully catered for in the implementation of CAP schemes such as: BPS, ANC, TAMS and GLAS.

Dr. Conway said that collaborative farming arrangements such as farm partnership agreements have the potential to tick all the boxes for the ideal family farm transfer facilitation strategy.

They enable young ambitious farmers to become formal partners in the farm business while also allowing for the older generation to remain actively engaged in farming.

“Their continued guidance and lifelong knowledge is invaluable to the future development of the farm,” he said.

The next stage in the process involved Leo having ongoing discussions with his agricultural advisor and the Department of Agriculture.

“I then set about applying for a new herd number and purchasing stock to meet stock level requirements. I also had discussions with my agricultural advisor about the Basic Payment Scheme,” he said.

Overall the process was straightforward, with good legal advice and open-minded family members critical to the smooth transition, Leo said.

“All the Department of Agriculture staff I spoke to were helpful and assisted greatly in my entry into farming as a ‘Young Trained Farmer’ under the Basic Payment Scheme National Reserve and Young Farmers Scheme,” he said.

Towards the end of 2015, when I first began farming independently, I had zero stock of my own, no sheds or machinery and minimal fencing. I was lucky to have my land base, however, which is the hardest part for any new entrant into farming.

“When TAMS II was announced, I applied under the Young Farmer Capital Investment Scheme for around 4,000m of sheep fencing, along with associated gateways.

“I qualify for a 60% grant aid on this project and feel it is going to set a solid foundation for my enterprise going forward,” said Leo.

“I found the TAMS II application process straightforward, with documents regarding my farm and qualifications submitted online. I was contacted by department officials on a few queries but I’m glad to say I have the project started with no regrets and hope to be finished by autumn,” he said.

“Although it is a huge capital outlay, especially factoring in the fact I have had to purchase all stock from the outset, I still think after doing the maths and weighing up the benefits that it is an excellent opportunity seized,” Leo said.

For more information on farm viability and competitiveness in rural Ireland, join the National Rural Network on: www.nationalruralnetwork.ie.