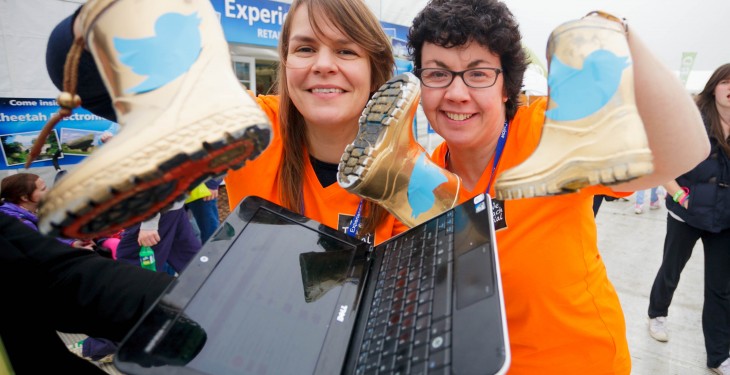 Tweeting farmerette Lorna Sixsmith went to the National Ploughing Championships with a mission this year – to get more farmers tweeting.  We Teach Social offered free social media seminars and one to one training in the Experience Carlow tent. Did many farmers take them up on it?

“A significant number of farmers and business people came to us for social media advice and tips,” said Amanda Webb, co-owner of We Teach Social. “Farmers were mostly interested in learning how to tweet, our slogan of ‘Twitter is like a discussion group in your pocket’ grasped their attention.”

This year was the first time that the curated Twitter accounts @tweetingfarmers and @ireland reported from the Ploughing, bringing the wonders of this large three-day event to followers all over the world.

“Many farmers wonder how Twitter can benefit them,” said Sixsmith. “The reality is it has many benefits, from alleviating isolation to providing the answers to questions, from showcasing how Irish food is produced to increasing sales of Irish food in Ireland and abroad.”

Many farmers and non farmers used the hashtags #ploughing and #digitalwellie to communicate with each other, to tell their followers about the various ploughing activities and to comment on the event. The first ever Ploughing tweetup was held at 2pm on the middle day – twitter friends who had only met virtually meeting up in person to put a face to the avatar.

We Teach Social launched its latest social media course at the Ploughing, entitled ‘Beginners Twitter for Farmers and Agricultural Companies’ and it starts on 14 October. It is delivered online over three weeks. All you need are a computer and an email address.