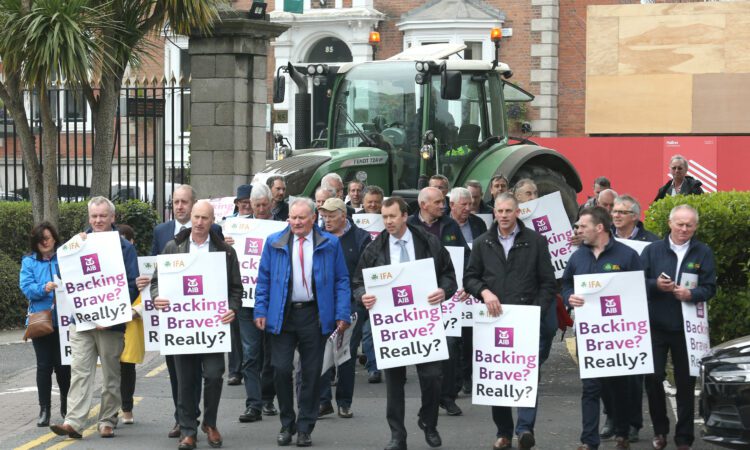 Members of an Irish farm lobby group gained entry to a Dublin hotel this morning, Wednesday, April 24, ahead of AIB’s annual general meeting (AGM) to resist the bank’s proposal to include certain farmer loans as part of its recently announced loan sale.

Speaking as part of a group of Irish Farmers’ Association (IFA) members outside the AIB AGM at the Ballsbridge Hotel in Dublin, IFA’s farm business chairman Martin Stapleton said: “It is wrong that AIB would sell these loans to a vulture fund.”

Stapleton continued: “This decision flies in the face of AIB’s marketing campaign which is built around ‘backing brave’.

“We want AIB to remove loans from the sale that have been restructured, or where the farmer is making a genuine attempt to pay or negotiate with the bank.

Irish taxpayers retain a 71% stake in AIB; we bailed out this bank when it was on its knees.

“The sale of farm loans occurs without any clear selection criteria being provided to the borrower. There is no transparency in how AIB approaches these sales.”

Stapleton called on the Minister for Finance and Public Expenditure and Reform, Paschal Donohoe, to intervene and ensure that AIB is not allowed to “abandon the Irish people”.

Farmers contributed significantly to keeping those very banks afloat during the crisis.

According to a statement from IFA, the association will be bringing its campaign around Ireland over the next few weeks.

It intends to have a “rolling presence” outside branches around the country, reminding customers about how farmers have been treated by AIB and insisting that such loans are removed from the sale portfolio. 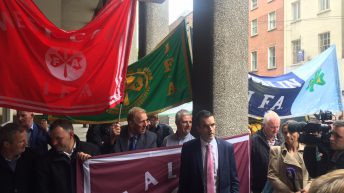