Farmers are the single biggest custodians and protectors of our archaeological heritage, according to the Department of Culture, Heritage and the Gaeltacht.

Every year, at the National Ploughing Championships, the department receives reports from farmers about previously unidentified monuments on their lands.

Speaking to AgriLand, a department spokesperson revealed that approximately 150 newly discovered monuments are included to the archaeological survey record each year – adding to the 140,000 monuments already recorded.

The National Monuments Service (NMS) at the Department of Culture, Heritage and the Gaeltacht is regularly contacted about newly identified monuments, according to the spokesperson.

“Most reports come from interested members of the public, archaeologists or landowners. Some new monuments are identified through browsing the NMS internet viewing platform,” she said.

(The platform is available at www.archaeology.ie)

Other archaeological sites come to light on foot of specifically commissioned research, including Lidar (laser) surveys.

More new sites are referred to the department by people simply observing features and monuments of potential archaeological interest, while they are out walking in the countryside.

“New archaeological sites are also identified through licensed professional archaeological activity such as excavation and geophysical survey,” she said.

Every report of a potential discovery is followed up by a site visit by NMS officials; this is done to confirm the existence and form of the monument and to examine its context.

Currently there is no legal obligation to report newly identified archaeological monuments.

However, the introduction of a reporting requirement will be considered as part of proposed new legislation to modernise, and streamline, the current legislative code that dates back to the 1930s, said the spokesperson.

“There is a statutory duty under the National Monuments Acts to report newly discovered archaeological objects to the director of the National Museum of Ireland, or to the Gardaí.

“The State is the owner of all such archaeological objects; following legal proceedings relating to the Derrynaflan Hoard,” she said.

“The National Monuments Acts also make it illegal to use a metal detector to look for archaeological objects without a licence from the minister because of the potential damage from unscientific retrieval of artefacts,” the spokesperson said.

Our archaeological heritage belongs to all the people of Ireland. The National Monuments Service greatly appreciates the support it receives from, and will continue to work with, the farming community in protecting that heritage for generations to come. 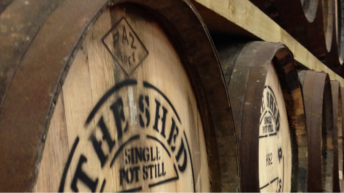 Connacht’s first whiskey in 104 years launched at the ‘Shed’