‘Driving milk output this autumn when herd expansion is not possible’ 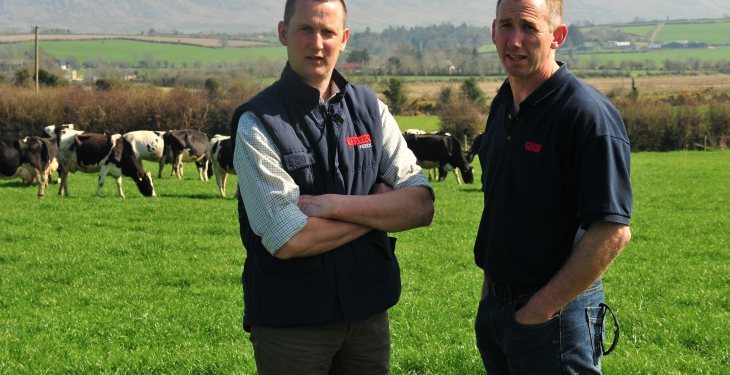 Increasing yield per cow will be the main approach taken by Co. Carlow milk producer James Doyle as he endeavours to increase the scale of his dairy farming business in the post-quota era.

With lower milk prices currently and the removal of milk quota he says he is using targeted feed supplementation this autumn to produce more milk and bolster milk revenues.

“I am pretty much land locked,” he explained. “So upping the size of the herd is not really an option. But getting more output from each cow certainly is.

“I have re-seeded the entire farm over the past five years, so getting more milk from grazed grass should be feasible during the period ahead.

“Breeding to improve milk solids will be another strand to the development of the herd. Over the past number of years, I have used a lot of Holstein bulls on the cows.

“My intention is switch back towards British Friesian sires over the next couple of years. This should allow me to breed heifer replacements that are better suited to maximising milk output from grazed grass.”

“Winter milk production has been a traditional feature on the farm. I have been farming on my own for the past twenty years and have always strived to have as many of the cows as possible achieve a 365-day calving pattern.

But that’s not always feasible, so it is convenient to let some of the spring calvers that do not come back into calf that quickly slip into the autumn group.

“Approximately 70% of the cows are in the spring calving batch, with the remainder calving between October and Christmas.”

John explains that even at low milk price, there is a good economic response to strategic use of concentrates in late lactation.

“The two best indicators of milk processability during autumn which are often problematic on farms are milk lactose concentration and somatic cell count (SCC) level. A low concentration of milk lactose (<4.35%) indicates that the milk is of poor processing potential.

James adds that “we will use feed strategically to extend grazing rotation and maintain grass cover in order to maintain grass in the diet for as long as possible. For maximum economic gain, grass substitution must be minimised. Condition score at calving is best managed by ensuring cows are dried off at the appropriate condition score.”

“Cows and young stock are at grass for almost ten months of the year. This is a tremendous cost saving, given that the alternative would be to feed expensive silage over a five month winter, instead of the 8 weeks or so that is now the norm for the farm,” he explained.

This autumn James is feeding the new GAIN Autumn Extender 14% Nut which encourages the cow to maximise grass intake and will help improve cow body condition as the herd approach the dry period. Improving dry cow management practises on the farm is another priority for James moving forward.

John Enright adds “that there are a number of key benefits of extending the lactation length with the strategic use of concentrates such as; a longer lactation length will produce additional milk solids and increased milk composition will increase milk value.

It helps to build the grass bank for backend grazing and to balance autumn grass by supplying Magnesium and minerals. Extending the lactation length also helps dry matter intake to aid milk lactose levels, it influences the condition score prior to drying off and provides CalMag to help prevent Grass Tetany.”

James says there is scope to further develop his dairying business.

“But it will be done at my own pace and in a way that suits the conditions that exist on this farm. My initial focus will be on building up the breeding potential of the cows, so as to increase output and profit per head.”

In association with GAIN Feeds.