A driver of a 4X4 was pulled over by Gardai for speeding at 150kph, while towing a trailer on the M3 motorway.

The driver was stopped by Gardai in Co. Meath, according to a tweet on the official twitter page for An Garda Siochana.

If a person is towing a trailer, the maximum speed you can travel at is 80kph, the tweet added. This meant that the driver was towing the flat-bed trailer at almost twice the legal speed limit.

The Gardai also reminded drivers that they must acquire the correct licence before towing a trailer on public roads.

Meath traffic unit detected 4×4 & trailer doing 150 kph on M3. If youre towing a trailer max speed is 80kph & you must have correct licence pic.twitter.com/vwWy9dTL4S 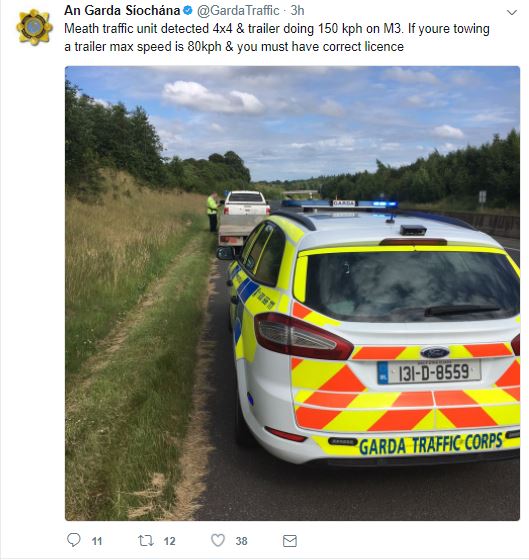 Last week, two 4X4 drivers were pulled over by Gardai in separate incidents in Co. Wexford for towing a trailer without a valid BE licence.

Have You Got The Proper Licence?