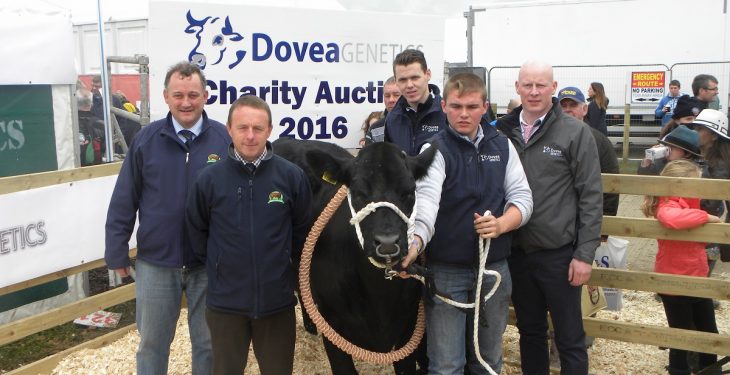 This Limousin heifer made the top price of €3,400 at auction.

Dovea Genetics, one of Ireland’s leading dairy and beef semen suppliers, raised over €16,000 in aid of Bothar at a charity auction.

A total sum of €16,100 was made following the auction of six heifers, all sired by Dovea bulls, at the company’s stand at this year’s National Ploughing Championships.

As part of Wednesday’s ploughing action, Kilkenny-based Auctioneer George Candler and renowned GAA commentator Marty Morrissey each took hold of the gavel to auction off the heifers.

To help with the promotion of the auction, Dovea Genetics enlisted the help of six well-known sports personalities to lead a heifer each into the sales ring.

The six heifers were bought in spring 2015 and were displayed at the National Ploughing Championships in 2015 to raise awareness about the auction.

Prices on the day

A Limousin heifer made the top price of €3,400 at the auction. The 575kg heifer was paired with seven-time All-Ireland champion and Kilkenny hurler TJ Reid.

Another heifer, sired by the Dovea Simmental bull Derrough Samual, sold for €2,400.

Westmeath footballer and Teagasc student, John Heslin also gave a hand at the proceedings and the heifer in his hands, a 535kg Charolais heifer after Usufruit, brought in €2,800 at the auction.

A 670kg Aberdeen Angus heifer sired by Lisduff Dandy and lead around the ring by Marty Morrisey made €2,400 at the auction.

Dovea Genetics has a long working relationship with Bothar, where they have been providing dairy semen to numerous countries Bothar have a presence in for the past 20 years, the company said.

With Bothar celebrating their 25th anniversary this year, Dovea decided to hold the auction to show its gratitude for being able to work alongside Bothar assisting and improving the standard of living of those in need.

Speaking at the launch of the charity event earlier this month, Peter Ireton, one of the founders of Bothar outlined how the two organisations began their working relationship.

The relationship between Bothar and Dovea started around 23 years ago when he was on a trip to Africa where he met a local farmer who asked if there was a way to get his cow, a local breed in calf to an ‘exotic’ bull.

Ireton got in contact with Dovea once he arrived home from that trip, and the two organisations came to an agreement which has continued for the past two decades. 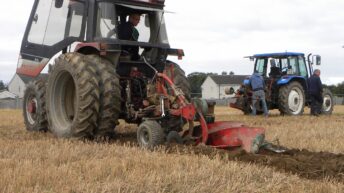 Pics: A round-up of events at Day Two of the Ploughing