Procurement managers reported tight supplies of beef cattle last week due to the National Ploughing Championships; many found it difficult to source stock.

However, they are expecting it to become somewhat easier in the coming days and, as a result, many have resisted the temptation to rise base quotes.

Processors are offering a base price of 375-380c/kg for steers and 385-390c/kg for heifers this week – pretty much unchanged from last week.

Some 36,104 cattle were slaughtered in Department of Agriculture approved plants during the week ending September 17 – an increase of 602 head or 1.6% on the previous week.

Steers and heifers accounted for 72% of all of the animals slaughtered during the week ending September 17. Steer throughput climbed by 2.4%; heifer numbers fell by 1.8%; and the young bull kill jumped by 6.7%.

However, there was some reduction in the number of aged bulls (-7.8%) slaughtered, while cow throughput was up (3.3%) during the week ending September 17.

In the UK, Ireland’s main export market, the AHDB reports that R3 steers are making 383p/kg; that’s the equivalent of 459c/kg (including VAT).

Woods added that UK cattle prices are running at 20p/kg higher than this time last year and market demand is very strong.

The change in the sterling exchange rate and the strong prices in the UK, he said, provide ample room for factories to increase prices back to farmers.

In addition, he also touched on the latest official Department of Agriculture prices for the week ending September 17.

These prices, he said, show that R=3= steers made an average price of 391c/kg or 8c/kg higher than this time last year. 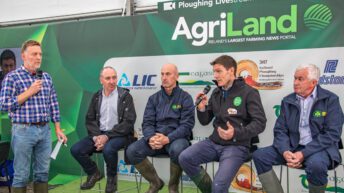 Farmers urged to know the value of their beef